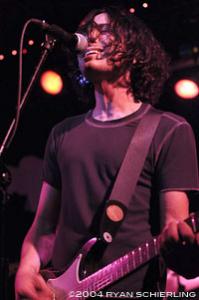 Catching Up with Jonny Polonsky

Recently signed to Loveless Records, Jonny Polonsky, brings his catchy yet tricky pop legacy to the stellar label with an indie rock blackheart. Jonny and imaginary girl Liz recently pummelled each other with emails and exchanged ideas on the indie rock musicals and Jonny's past, present, and future.

TIG: What is your favorite kind of coffee beverage?

Jonny: Today I enjoyed an iced coffee. They shake it up and I don't know what it does, but it does something delicious.

TIG: I love iced coffee!* Where do you get such a beverage?

Jonny: Starbucks. When I have time, I like to go to Felix's, an old Cuban restaurant near my house, and get jacked up on 500 cups of espresso.

TIG: Ah, the power of espresso!!! Speaking of enjoying the extreme, you've been described as an "obsessed rock and roll fan." Tell me about your first musical obsession. Does that 'first love' still affect you today?

Jonny: My earliest musical memory is of listening to "She Loves You" over and over and over on my portable record player with built in speakers. I remember my mom yelling at me from the bottom of the stairs that I had to go to school, but I just wanted to listen to the song one more time.

I still get excited about music but not in the same way. It seems like when you're young, you can really get lost in a record for months or years. I dunno, maybe that's just what it feels like cuz time moves so slowly when you're a kid. Now, I listen to a lot of different stuff and every once in awhile get obsessive about certain records. Like the Yeah Yeah Yeahs record (Fever to Tell), the Burning Brides first record, any of the Queens of the Stone Age, No. 4 by Stone Temple Pilots. Old favorites that keep inspiring me: Trompe Le Monde by the Pixies (actually all of their records, but this one is my favorite), Lust For LifeThe Idiot and by Iggy Pop, the Pretenders' first two records.

TIG: And your newest record, it has been released on a Seattle label, the super-fine Loveless Records. Why did you decide to sign with them?

Jonny They had the most money to put into promoting the record. I don't care so much about getting an advance to live off of, I just want the record to get out in the world and try to make some friends. Or get into some fistfights and make some enemies, just as long as it gets out of the house once in awhile.

TIG: There were nearly eight years between the release of your debut album, Hi My Name is Jonny and its follow-up, The Power of Sound (released 9/21/04). Were you working on the album that whole time?

Jonny: I never stopped writing or recording songs. For awhile I stopped trying to find a record label to release my records. It got really boring real fast. Plus, how long can you hear 'no' from people with bad taste and questionable haircuts, without wanting to chop off your own head and swing it around the room?

I did a bunch of stuff in the interim. I don't even know what that word means…I played guitar in Local H for a few of their tours, played guitar and keyboards (with my band) in the stage production of Hedwig and the Angry Inch, played guitar for Tony Hawk's Boom Boom Huck Jam tour last year. I recorded The Power of Sound on and off for about three years.

TIG: We recently had a stage production of Hedwig here in Seattle. It was incredible! Do you usually enjoy musicals, and think of your albums as a cohesive story, with songs representing different acts?

Jonny: I used to play in the pit band in high school and we did a lot of musicals. I always hated them passionately (or it could have just been the whole 'thespian' vibe—too many fake happy people with far too much false enthusiasm for anything. "Ron, that was the most AMAZING bowel movement EVER! I can't believe your turd actually sprouted wings and flew off into the ether!") But by the end of the three week run, I would realize that there were a lot of great songs from a lot of these musicals—Grease, Brigadoon, Fast Times at Ridgmont High, I Thought You Were Dead Donald Pleasance, Donald Pleasance…(My high school was very progressive)…

I don't think of making records in theatrical or cinematic terms. I just like it to sound good all the way through, and not have any parts that I would want to skip through.

TIG: So one could think of your albums as more of a mix cd or compilation of several different moments in time?

Jonny: I guess I would think of it more like a buffet. A buffet with only ten items, and you get thrown out after 20 minutes.

TIG: Do you think of music / albums / situations in terms of musicals? For example, I've decided that the lead singer of Delays should play the lead in Harry Potter, the musical… you know.. whenever they get around to doing it…

Jonny: Hon, what's the musicals? You might be looking for Mandy Patinkin–you got the Polonsk here.

POLONSKY'S TOP FIVE MUSICALS THAT NEED TO BE

TIG: AWESOME!!!! I will start looking for investors. After all, The Producers is so 2002. I can see the Three Amigos musical incorporating rollerskates or monster trucks. The masses would surely come out for that! Viva la musical!!!!

Jonny: You got it baby!

TIG: Hey, igDana and igChar… JONNY CALLED ME 'BABY' !!! Did you note his exquisite curly hair and long eye lashes?

*note to those who want to buy me a coffee beverage, I'll take an iced coffee with half coffee and half soy milk any day of the week or season of the year.