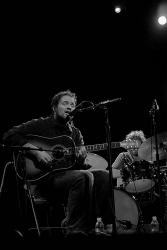 Joshua Morrison with Husbands, Love Your Wives and Damien Jurado

Once again, I hesitate to put forth a live show review from a night at the Triple Door, for fear of not doing it justice. This time it was Joshua Morrison headlining, doing his last local show before his deployment back to Iraq — and the only show I can recall in the last year or so that's actually moved me to tears.

What can I possibly say about someone who is leaving for war, and singing about home? It was as if Morrison's recent months of notebooks were scattered about the stage, moments of his life eloquently parsed into verse, and shiny from practicing them for this performance. The songwriting and delivery were both true and clean, without the stains of fear or complaint, as it seemed to translate from his very life experience into each pluck of the strings, and each breathy note. The new songs struck the hardest, all stories of goodbyes and gained perspective and Kerry Park; while the older tunes told stories of the change that had come from war, of both anger and love, of pain and acceptance. It was a joy to witness such articulate craftsmanship of words — while I appreciated him prior to this live performance, Joshua Morrison now holds rank with the top writers in my book, songs or otherwise.

I can't convey with enough depth and adjective what a moving experience it is to see someone singing because they have to, because they need to — simply by playing, Morrison made the night ring out with this tangible weight. This thread that he unknowingly wove through the crowd and back was broken only by thunderous levels of cheer and applause between songs.

It was, in short, the most truly pure emotive night of live music that I have witnessed in recent memory.

The ever-lovely Jamy from Husbands, Love Your Wives provided a gorgeous opening set to start the night, her beautiful vocals mixing melancholy and hope, simultaneous; and well-complimented by special guest Damien Jurado.