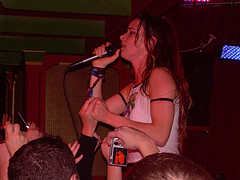 Juliette and the Licks

When I went to this show, I was mostly interested in one question: can an Academy Award-nominated actor put on an entertaining (or at least interesting) show despite having an uninspiring catalogue of songs to work with?

If the performer in question is Juliette Lewis, unequivocally, the answer is yes.

There were more than a few misconceptions or uncertainties I had going in to this show. I hadn’t really spent too much time listening to Lewis and the Licks’ music, and when I did, I found it underwhelming. Not bad or anything, just hardly innovative. The musicians were talented, but I’ve heard the same guitar riffs and drum beats thousands of times (mostly during the 1980s) and Lewis’s voice has a very limited range. She can’t be counted on to hit any notes that are too high or too low. Did she put this band together to relive a childhood dream that came from singing along into a hairbrush to too many Pat Benatar and Joan Jett videos? Would Chop Suey be packed with movie buffs and autograph seekers and not actual rock and/or roll fans? And what’s the deal with that Native American feather headband she’s been wearing as of late?

I was put at ease and all of my fears were put aside quickly. It did not take long at all to realize that, and I say this as free of hyperbole as I can, Juliette Lewis is the most commanding performer I’ve seen play at a club show. She exudes a fuck-all confidence and sexuality that makes it damn-near impossible for anyone there not to lust after her. Of course, she’s well aware of this and uses that to control her audience. Every time she was at the front of the stage there were a sea of hands trying to get as close to her as they could, but not actually touching her – even if she was well within their reach. They wanted to desperately touch her but were almost afraid they’d get kicked in the head if they tried anything. Lewis has boundless energy, too: she bounced around the stage like a pinball and at one point, dove head-first in to the crowd during her song “Got Love to Kill.” I don’t know which was more impressive, seeing Lewis dive in to the crowd at a small club like Chop Suey or that she did it mid-verse and did not miss a note.

Lewis and her band, the Licks, rocked for pretty close to an hour and a half, which was about twice as long as I expected. The club was packed with fans of her music first and foremost. While I’m sure many of them also enjoyed Natural Born Killers and From Dusk Till Dawn, the people who crammed into Chop Suey knew all of the words to all of the songs (it was probably a sell-out and pretty close to being uncomfortably packed). A small handful were even wearing headbands with feathers that has become a Lewis trademark as of late (she came out on stage wearing one but took it off after a few songs).

It became obvious to me that this band is not a vanity project for Juliette Lewis. She is touring small, often dirty, clubs that most Academy Award-nominated actors would not be caught dead in. Chop Suey is one of the better and cleaner rock clubs, but on a previous swing through Seattle a few years ago they played at El Corazon. This is not a band that is hired to play at openings of Planet Hollywoods or to entertain our troops on USO tours. At one point during the show, Lewis encouraged the crowd to buy CDs and t-shirts, explaining that she doesn’t have a red carpet rolled out for her and that she and her band survives from show to show the same way as every other touring band does.

Sure, Lewis has quite a few advantages that most indie rock bands don’t have. Yet, she’s got style to burn and can elevate a boring rock show into an all-out spectacle.

It was the type of performance they give Oscars for.