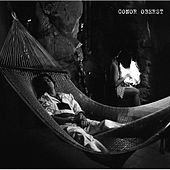 Just for Liz – Listen to the new Conor Oberst album!

Breaking away from my cruel dayjob overlords while their backs were turned, I spent a few moments reading Stereogum's thoughts on the new self-titled Conor Oberst album, due August 5th on Merge. Sounds like they like it, which should make a certain unnamed imaginary girl very happy:

On CO he finds a balance between growing up/staying young, between his more mature storytelling and his younger heartache. Maybe it was time he dropped Bright Eyes as a name and was somehow reborn, an older and wiser version of the kid who released that last non-Bright Eyes Oberst album 13 years ago.

But the real treat was a comment from Long Luke, who dropped a link to Rhapsody's free stream of the upcoming album. You've gotta sign up for a free account and who knows what kind of spam will fill your inbox, but if it gets you one step closer to Conor, who cares?

Confession time: I've heard exactly two Bright Eyes songs in my life, and barely remember them. Is this the album that'll bring me into the fold? I'm two songs in and like what I've heard so far. What Bright Eyes album would you recommend for a new fan?