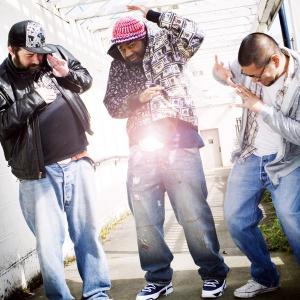 The Saturday Knights have not only released one of the most exciting Northwest records of the summer {Mingle}, but they're also hosting one super sweet event — literally. This Saturday, July 26th, the band will play at the downtown Top Pot Doughnuts during the second annual doughnut eating competition.

TIG had a chance to catch up with Saturday Knight Jeff Newton, aka Barfly, about the new record and doughnuts. If you want to see the Saturday Knights — or strut your competitive eating stuff — the action starts at 2p.

Have a Pink Feathered Boa for TIG, wouldya?

TIG: What is your relationship with the stewardess on the cover of Mingle?
Barfly: Ahem. She prefers the gender neutral term, "Flight Attendant," if I'm not overreaching. We know her from our salad days in the Portuguese navy. She's sort of a life coach for all of us.

TIG: "Dog Park" is a great pop song. What pop star would you most like to see cover it and why?
Barfly: Well assuming anyone would cover it at all is flattering, but I think Lilly Allen could cover it well. They aren't exactly pop stars but I'd like to hear what would happen to it in the hands of say Sam Coombs or The Clipse. All of those artists have terrific pop sensibilities.

Why a donut eating contest? Will any of you be participating in the gorge-fest, or just playing for those who do? Also, do you have any tips based on last year's competition?
A Donut Eating Contest sounds like a lot of fun until you're done eating the donuts, I'm guessing. None of us are competing but we do have a stern and rigorous screening against substance-enhanced performances on the field of battle. All of our athletes are off the pot for at least 24 hours prior to competing. My advice to prosepctive competitors is win. Win by eating the most donuts and when you've won, celebrate by having a few more donuts.

What was the best wine year for donut gorging?
2006 was a good donut year for Washington vineyards. Might I suggest a Top Pot Old Fashioned accompanied by a 2006 Chateau Emerald Queen Port? It's raisiny bassnote is a fine compliment to the glazed loaf of cake sweating on your plate! Let's eat.

Lastly, if you could have a donut called a "Saturday Knight" what would it be and why?
A Saturday Knight is just a bacon wrapped glazed with a Crown & Rocks in the hole.