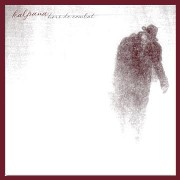 The morsels of jaundiced light that make it through your bent and haggard Venetian blinds, taunt you. Everything outside of the set of walls where you ferment seems futile. You let the soft mattress envelope your entire body. For a moment you entertain the idea of climbing out of it, climbing out of this malaise but decide that would only make you tired. In all of this crushing sadness you begin to understand the unbounded beauty and possibility in the fleeting nature of existence and something that could almost be described as hope emerges, making itself a bit more available than it had been in moments passed. This is, more or less, the effect of Kalpana's debut release Hors de Combat.

Kalpana's sound is brooding, dark, and introspective — a captivating amalgam of sounds that conjure up bands such as Rodan, Explosions in the Sky, Kill Sadie, and even a little Up On Ins. From the moment I placed "Hors de Combat" into my stereo I've had a hard time taking it out. Nine well crafted songs clock in at over fifty minutes.

Kalpana, at its core, has the traditional rock band foundation of two guitars, bass, and drums. However, they take their time to let songs grow and realize themselves, adding keys, percussion and samples. Vocals are used sparingly and when they do come into a song they don't attract attention to themselves. They are unassuming and merely affix another layer of sound and texture to the already lush, expansive dreamscape that they have spun. This is an impressive first release. If you don't find this recording and listen to it in an attempt to escape those around you by turning inward, shame on you.