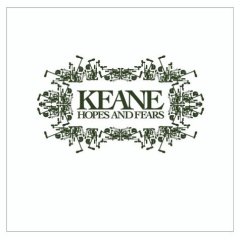 The first time I heard Keane, I was struck by the intense familiarity of their music. Not familiar in the generic "oh I've heard this before" sense of the term; rather, Keane's songs are like something remembered from a dream — ethereal, rich with meaning, bordering on celestial. With only piano, keyboards, drums, bass, and the highly expressive vocals of Tom Chaplin, this three-piece concocts glamorous, full-sounding tracks imbued with bittersweet beauty.

While comparisons to fellow sonorous Britpop bands Coldplay and Travis continue to run rampant (and rightfully so, to a certain extent), don't think Keane's music is simple mimicry. The exquisite talents of Tim Rice-Oxley on piano, keyboards, and bass, when combined with Chaplin's achingly beautiful vocals and Richard Hughes' sparingly perfect drums, let Keane create not just songs but atmospheres, swirls of music that engulf you as you listen. Musically, Keane is intricate and lush, moving far beyond formulaic (dare I say, sophomoric?) commercial favorites. What's more, Keane achieves its sound without any guitars (save a bass for rhythmic enunciation). Lyrically, the songs possess both complexity and charm — Chaplin manages to articulate universal sentiments about everyday life in a manner that inspires empathy in the listener, without sounding common or maudlin (which is far more than I can say for certain bands who write annoying and impossibly sappy hit songs about colors and bad luck with weather).

Don't write Keane off as merely derivative. When a band takes an existing genre and goes beyond previously established understandings of that sound, as Keane has with Hope And Fears, the label "derivative" just doesn't fit. Keane redeems the soaring Britpop musical trend (a trend that, until Keane came along, I enthusiastically shunned) by infusing the genre with a greater sophistication.

As an album, Hope And Fears is very all-of-a-piece; each track dovetails neatly into the next, leading you along a path that is at once familiar and foreign. The mood wanders from song to song; melancholy ballads like "We Might As Well Be Strangers" live peacefully next to more uptempo — albeit still poignant — tracks like "Everybody's Changing." A subtle apprehension and longing underlies Hope And Fears throughout — Keane makes manifest the vague disquiet and expectation that accompanies reflection on future days. It's a gorgeous album, a strikingly impressive debut LP, and a must-have for anyone who enjoys listening to pure beauty.