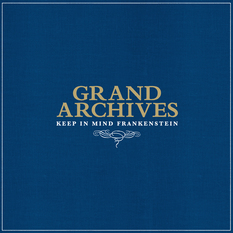 Keep In Mind Frankenstein was recorded at a studio called Paradise Sound in a spiritually and economically crippled town called Index, WA. This berg was no paradise though, with many necrotic mining town incidents, including a rumored double suicide somehow helping to inspire the album’s dim, moist feel.

What was supposed to be Grand Archive’s glory-to-glory follow up to their assured self-titled Sub Pop debut was instead swallowed by spontaneous new material, sung in first takes in nocturnal bursts of inspiration as the band were isolated in the loony-boonies. (I won’t imagine the libations, but absinthe and opium seem possible.) The Furies-style haunted backing vocals of Sera Cahoone and Jenn Ghetto returned to help previous bandmate and Grand Archives leader Mat Brooke (singer, songwriter, guitar) create something as beautiful as it is disturbing. Everything that had been prepared for Frankenstein had been jettisoned save for “Dig That Crazy Grave,” which, despite its title, is placed in the middle of the second half of the album as some relief to the gorgeous Washington State Death Trip swooning and moaning around it.

The first song after all is “Topsy’s Revenge,” in which it seems the ghost of the elephant who was filmed being electrocuted by Thomas Edison craves the burning down of the carnival town he was sacrificed in. This is one of those pretty little vocal-based numbers that creep up on you, seeming like perfectly pleasant contemporary indie folk-rock until you realize that Brooke is channeling a world of angst and his mournful repeated finish feels both more compelling and threatening on repeated playing.

With recording help again by the hotly-buzzed about producer Ben Kersten (The Lights, Panda & Angel, Blood Brothers), Brooke pulled in an old Radio Shack Theremin, and designed destruction into the creation of the album by making an enormous glass harp out of wine glasses, which he smashed to bits after putting the unholy sound in songs like the melodically gripping “Oslo Novelist.” Touches like these would mean little if this were just another freak folk album or bland singer-songwriter faire; but these are meticulously painted musical backgrounds for some astonishingly improvised performances, with excellent lyrics delivered with dark but restrained emotion.

I almost hate to push the black, weird elements of the album, as that might hinder commercial sales of a collection of songs simply superior to most in the band’s emergent genre. I am into finely created depressive stuff, so I’m going to be playing this all year — but probably wouldn’t have if it wasn’t both so well thought out and sounding as if it was created in a moment of uncanny possession. Frankenstein is no stitched-up sophomore album for the soft beard crowd; its layers may reveal a true masterpiece as we return to it again and again over the next few months. That I intend to says enough right there.