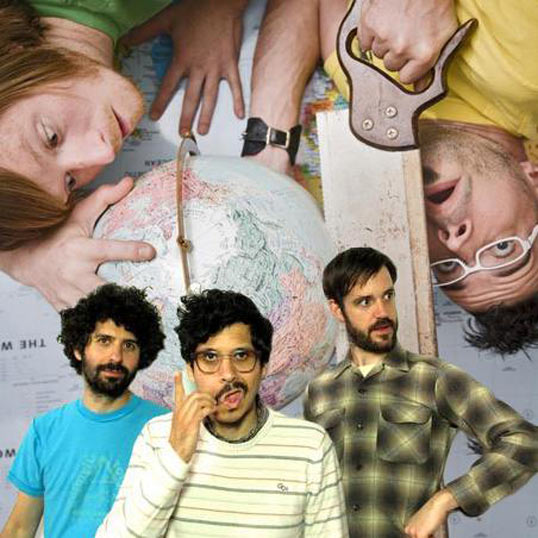 WHY? and Themselves team up for exclusive MP3 just before dropping new LPs

WHY? is releasing their fourth album Eskimo Snow on September 20th — with a batch of creatively-overloaded tracks, just as they “roll up” a joint (ha!) with Themselves, a little national love to our Northern neighbors, “Canada” (right click here).

Here’s the information on the collaboration: Both groups go back to seminal language and noise UG lords cLOUDDEAD, and has all members of both groups on the track, with vocals from son of book editor and rabbi Yoni Wolf (the main vision of WHY?) and Doseone from Themselves. The latter is dropping CrownsDown after making impressions with its mix tape shenanigans earlier this year.

WHY? has established a rippling-wide cult following based on Wolf’s incessant talking-blues automatic diarizing journalist vocal style, and though the ten tracks on the follow up to last year’s praised Alopecia LP were actually conceived at the same time, the sweetly melodic keyboard textures and little riffs seem more fluid. Looks like WHY? has saved the smoother stuff for “Eskimo Snow,” but that doesn’t mean there aren’t bitter and vicious confessional images in songs like “Against Me” and “Even The Good Wood Gone.” But there’s some existential chilling to be found as well, with “The Blackest Purse” and the title track ending the ten song cycle strongly.

WHY? will be out to Seattle in October (14th, at the Vera Project) but check out “Canada” above and look for Eskimo Snow to learn all the words (and there are many, and some combinations of them are some of the smartest and funniest lines you’ll hear this year).