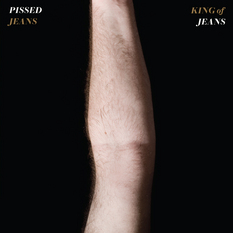 Pissed Jeans has one friend on MySpace — Tom. Because he’s such an inclusive guy, I guess.

This may be what happens when you make rock music as anti-social sounding as this “living here in Allentown” band does on their third (second for Sub Pop) album, King of Jeans. Touring for their debut Hope For Men, the New York Times specially noted the crackling response from a likewise awkward crowd, feasting on the low and slow noise-core that once had Flipper and Black Flag dig in. The angsty expostulations of “Lip Ring,” “Dominate Yourself,” etc. are again batter-slammed by drummer Sean McGuinness, whose kick on this record is as yeasty and strong as his last name. Guitarist Bradley Fry collides with the rhythm with as much acidic string spray as can be collected.

“She’s Science Fiction” is my favorite song this time out, a bopping little metaphoric ditty that halfway through the LP is their most melodic track here, but I also deeply admire the near eight minute opus “Spent,” which is up there with anything on “My War” for torsion-inducing psychosexual vermifuge. Of the former, I wish Matt Korvette would sing like this more (the first few tracks here stubbornly use him as a vomit-barking instrument, raking his vocal cords like a kerosene-treated trumpet), but that wouldn’t accurately reflect the roaring onslaught of their live alacrity.

Bass player Randy Huth has joined Pissed Jeans from Drag City bands Randall of Nazareth and Pearls & Brass, and his simple throb reflects the migraine-mainline of the first Danzig album — a fine, fiery match for McGuinness. It’s got to be a hot mess in Pennsylvania for these boys to be brawling this batch of songs out.