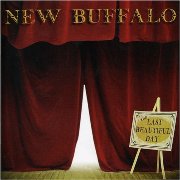 Darren Seltmann of the Avalanches has a lovely 30 year old wife who likes to stay inside and play with lots of instruments, making up dazzling melodies for delightful songs. The Southern sun of Melbourne, Australia no doubt slobbers down around outside their musical gear-cluttered home as she sings, "Where's the diamond in my messy mind?" Her voice lilts in enchanted waves upwards, forgetting about the time, the next pot of coffee to be made, caught up in the swelling and swooshing keyboards she sings and talks and hums over. "Ideas stacked up high," she sighs, building a lattice-stitched sleeve for us to enjoy them in.

New Buffalo is a town on the shores of Lake Michigan, and it is Sally Seltmann, one of those attractive girls who also happen to be effortlessly talented. She could have been a model or an actress or just a singer's wife, but she's a little weird, too, reclusive and maybe socially awkward. More than that, ambitious — and quietly confident. She really knows how to put songs together, how to bring her voice down low for dramatic effect, how to spin out a sweet line and a frosty description.

Friends come by to assist her — Beth Orton on the somewhat-anthem "Inside," Dirty Three drummer Jim White on a trio of songs — and I imagine they imbibe caffeine or alcohol and play what must be an enormous record collection shared by the Seltmann's, going from the sublime Scottish pop of Belle & Sebastian, to the big band flirtations of Bjork, the happy vulnerability in the vocals Frente's first album, to the textures of late 80s Cocteau Twins, and it just goes on. There's even a little feel of Tom Waits in the swing of some of the vocals. But I have no idea. It just seems this debut full-length is well enough developed and confidently performed, it feels like its been absorbing the best elements of underground pop music for over a decade.

I do know that Seltmann had tried this before earlier in the century, working on an EP with her husband titled About Last Night, which was distributed in England as well as their own country. I've never heard it, so I don't know if she's progressed, but I imagine it was better than the next release — when they took a journey to Los Angeles the next year to work with Madonna and Bjork's producer Jake Davies, and things fell apart. It must have taught Seltmann to trust her own instincts, so she went back home and started over, founding The Lonely Studio, the private kitchen where The Last Beautiful Day was carefully and joyfully created.

Sure, the album doesn't feel like it's necessarily heading anywhere — it's inevitably a pile of ideas, as prophesied by the creator herself. It meanders just when it should bring in something real (in the words, in the music) to make it more than four color, to make it bloom into full technicolor. "Make it come alive," she sings, but it never quite does. But she has served up the tastiest pop pie since Camera Obscura's Underachievers Please Try Harder, and that in itself is worth visiting her kitchen for.