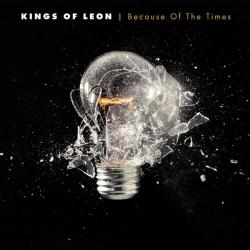 Because of the Times

A lot has been said here on Three Imaginary Girls lately about our friends, Kings of Leon. They seem to be a band that causes a lot of mixed emotions and that can all likely be traced to their current adolescent state between a little band only you and your friends like and being a full-on rock band filling arenas. Because of the Times inches the Kings of Leon much closer to the latter, not only with its impressive Top 30 debut on the Billboard album charts (and #1 in the UK), but also with the band’s decided turn towards a more restrained and mainstream rock sound. This turn has unfortunately stripped a lot from the Kings of Leon’s rock sound, leaving them listing a little too much into bland rock than they probably hoped, but there are still points were you can hope that the Followill’s can keep their identity intact.

The Kings of Leon made on odd decision to lead off the album with the seven-plus minute “Knocked Up,” a song that is sort of a modernized, man’s-eye-view of Madonna’s “Papa Don’t Preach,” but obliviously musically influenced by the Kings of Leon’s place opening for U2. Strip the vocals out, you could almost place the song as an outtake from The Joshua Tree, with the echoing, Edge-like guitar and the low, rumbling drums. And yet, somehow, the song just doesn’t come together; instead it just drifts along for seven minutes without building much musical or lyrical tension – which is what you need when you record a song of such length.

This isn’t the only odd musical departure for the band. On “Charmer” you have to wonder if someone got a little too much into their old Pixies albums for their own good. “On Call” is just straight up Third Eye Blind mainstream alternative rock and wow, you worry how easily the band converted into VH1 fare. Then they just say, “Hey, let’s be Bloc Party” and record “McFearless” – I’ll let you imagine how that turns out. “Black Thumbnail” is a little more like what you would expect from the band, a real all-out rock song, but it lacks a real hook like previous Kings songs like “Red Morning Light” or “The Bucket.”

A surprising number of songs on Because of the Times are just not memorable and that might be the biggest failing point of the album. Alright, at this point, you’re probably wondering if this album has any redeeming moments and I admit, I haven’t really painted the most flattering picture. The problem is that the Kings of Leon did manage to sneak a gem of a song onto the album, albeit with the worst title they could muster. “Ragoo” (ah yes, let’s have some pasta, y’all) is remarkably infectious and using all the strengths of the Kings of Leon: dueling guitar, Caleb’s howled vocals, and classic rock and roll hooks. The song jumps back and forth from an upbeat, chiming verse to the more aggressive, growling chorus seamlessly and somehow arrives at a middle ground that makes the song a potential sleeper hit if it could ever make it to the airwaves. Whether or not it benefits from its place after “Ragoo,” “Fans” is also a little stronger of a song for the Kings, keeping more of their sound around while merging into the mainstream. “Trunk” is a slow song that almost has a Doors-like vibe to it (well, even with the low bassline).

Maybe the problem here is that the Kings of Leon have been hanging out with too many tried-and-true rockers, like U2, Pearl Jam, Bob Dylan and the like. It has seeped its way into their sound both in good and bad ways (mostly bad): sure, the songs are catchy and melodic, but they lack that fiery soul that the band had on Youth and Young Manhood. Maybe we should forgive them for grabbing for that brass ring, but Because of the Times really lacks a lot of substance that is replaced by a lot of gloss.