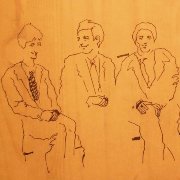 LEARN: The Songs Of Phil Ochs

The artistic schism comes down to this: Ben Barnett of Kind of Like Spitting is the Phil Ochs to Conor Oberst's Bob Dylan. Will this make sense to anyone who either didn't grow up in the 60's or hasn't at least dabbled enough in the history of the relationship between those artists during that period?

A brief history for the (understandably) unaware: Dylan was the folk prophet who initially smeared his voice with the essence of protest and poetry from American history; Ochs was part of his milieu, along with Joan Baez, of new American transcendentalists doing to folk music in NYC what the beatniks had been doing to literature for a few years (reinvention of both genre styles and their own identities). Dylan's persona was as a timeless trickster, who would even sacrifice his initial musical form (Guthrie-style hobo tunes and lamentations) on the altar of apocalyptic rock to prove his Abraham-Isaac point about popular music. Note Bright Eyes' recent ability to be topical and musically diverse, simultaneously. (His acerbic relational viewpoint in songs also harkens back to the Dylan of "It Ain't Me, Babe," as well.)

Ochs was also a Jewish boy with a Jones for the twisted American dream, full of passion for traditional folk hero imagery, and he had a fiercely satirical wit. He possessed a gift for "musical journalism" which he used as the template for most of the songs in the early part of his career (which Barnett focuses on here, pretty much). Most people perceived him, probably from our vantage point now, as sort of a Lenny Bruce meets Randy Newman: The Nasty Rabbi as an Americana folksinger, just as self-mythologizing as Dylan, but (and this is the important thing) not "cool."

Ochs addressed injustice as poetically as his mentor and rival Dylan had, but he did so with big buckets of passion, as in the perfect example of protest overkill, "Here's To The State Of Mississippi," where he loses his nut and basically wants to blow up the entire state. (As opposed to "The Lonesome Death of Hattie Carroll," Dylan's carefully crafted and paced complaint against the way poor people's lives cheapened by capitalism.) Romantically, he might have treated his wives and women as cruelly as Dylan had, but he didn't brag about it in his songs. Instead he demonized the abusive male he loathed in himself and projected it on to the kind of government that wanted to cause a needless, self-destructive war in Vietnam. It was psychological deflection that made for a unique form of song-craft: Sort of like how emo boys put on their feedback-slopped marching boots to let the world know they've been used as doormats through every relationship they ever had.

Speaking of emo boys, that's where Kind of Like Spitting comes in, after ten years of existence, and over half a dozen "moody doomed love" affair albums (thanks, EC). Ben and David have done their homework on Ochs' mordant early work, where he doodled out his clinical depression in non-album tracks like "I'm Tired" and "You Can't Get Stoned Enough." Both are delightful downers from the hand of a brilliant narcissist, as grey and absorbing as anything Kurt Cobain ever wrote.

From there, Kind of Like Spitting turns to Ochs' more flagrantly topical material, reminding the listener that things haven't changed much since the mid-60s, when a great deal of the American populace didn't think the government gave a shit what they really felt about anything. The seven-plus-a-fragment selections on LEARN may be spare but are choice: "Draft Dodger Drag" will always be funny, with its list of ridiculous complaints keeping someone out of military service ("I'm only eighteen, I got a ruptured spleen, and I always carry a purse"); the brawling optimism of "That's What I Want To Hear," urging people to self-empower, kick ass and not just complain about oppression or need in their lives; the almost horrifying "Outside Of A Small Circle of Friends," the lyrical examples of which convict any listener not actively trying to make life around them better (a woman getting dragged to bushes and stabbed as people just stay in their apartments, not getting involved); and the quintessential rebel rouser, "I Ain't Marchin' Anymore." (The guitar playing on this is as perfect as Ochs' original — man, that must have taken some practice!) None of these seem out of date, even if the haunting ambiance of where the record was recorded (Gene Autry Theatre in Los Angeles, on a humble two-track) paints the recordings as starkly as Ochs' originals.

It sounds as if Kind of Like Spitting had fun making this tribute, and they've selected some songs that should never be forgotten and could really stand another listen now. (The hidden track is nice, too.) I would love to hear a sequel sometime, maybe of later material, when Ochs had followed Dylan's lead and gone from newsprint-inspiration to more cinematically-large epics. (I'd love to hear Ben and Dave cover the thirteen minute fall-of-civilization "When in Rome" off Tape From California, for example, where every cruel desire inherent in humanity is explored with "emocore" level passionate overkill. Boys?)