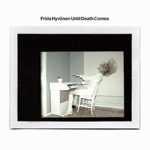 For those of you who are frequent visitors to Three Imaginary Girls ("Hi!"), you know my recurrent struggles with the forces of the Fiery Furnaces. There have been accusations that I just "don't get it" and I should go into a safe field like geology or botany where discussions of the musical merit of a three minute long improvised organ solo are few and far between. These criticisms are duly noted, but then along comes someone like Frida Hyvönen, the sort of artist that makes me feel alright because she experiments and she makes her songs listenable and downright catchy while at the same time invading new sonic landscapes. I can rest easy knowing that maybe, somewhere, there's someone who understands my plight. Until Death Comes makes that plight that much easier to bear.

Frida Hyvönen hangs around with the likes of Jens Lekman and Jose Gonzalez up in the great white North of Sweden. Whatever those crazy socialists have been putting in their water, they need to keep it up for the sake of the rest of us who lament the state of music worldwide. Until Death Comes is an odd combination of a Fiery Furnaces sort of sound with melancholy of Kristin Hersh and a peculiar playfulness that binds it all together in what could be an incongruous blend. Driven by Frida's manic piano playing, Until Death Comes is captivating without being overbearingly experimental to the point of cacophony. The opening track, "I Drive My Friend," sounds like Tori Amos without all the latent anger, translating into a playful but not cheesy sound rich with a bounding piano. This mood continues on "Djuna!," where the strange lyrical skills of the Scandinavians these days stand out with Frida singing "last night when I was out, I bought myself a drink/open the memories and violence poured out." Most of Frida's lyrics appear to open herself to the listener, adding to the intrigue and soulfulness. At times, she sounds like she's channeling Kristin Hersh from Hips and Makers, such as "You Never Got Me Right," with vocals that sound on the verge of breaking. "Once I Was a Serene Teenage Child" has this same mood, with Frida's vocals whispering a lost innocence mixing with echoing piano (although it is disconcerting to hear anyone sing "I don't want your body so close and dismembered.")

If there's any warning to add to Until Death Comes, it should be that maybe you shouldn't listen to it if you're already down. In "Today, Tuesday," Frida laments, "today is Tuesday/I got your letter days ago/it was printed out and kept in my purse," in what sounds like an acoustic Bjork song. "N.Y." has such a restrained passion to it even though the chorus is, well, "na na na na." It captures a sense of loss and bitterness over New York as Frida sings, "flattering me way too much/New York" with a haunting, distant trumpet solo bridging the verses together.

This is not to say that it's all downers. Frida lets loose on "Come Another Night," which has more of the late 60's pop feel of Belle & Sebastian, right down to the lively handclaps (ah, handclaps), but right now, it seems like the cold, northern winters control Frida's moods. Until Death Comes closes with "Straight Thin Line" where Frida let herself out when she admits "one thing in life so far/I wanted most of all/it was to straighten out my bends and my curls/how to escape my shape." Frida approaches that Conor Oberst-level of emotional stripping but with a piano instead of a guitar.

Until Death Comes has a remarkable sincerity without becoming bogged down in overt sentimentality that it makes you want to listen to these obviously emotional songs over and over without feeling overwhelmed. Frida Hyvönen is sort of a Swedish Joni Mitchell or Liz Phair in that sense, creating songs that don't sacrifice melody and listen-ability in the name of intensity and sonic expressionism.