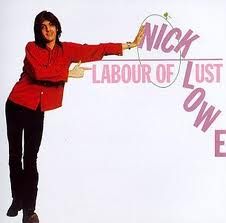 THIS LP POPPED MY NEW WAVE CHERRY. It was 1979, my parents had taken me to Peaches on 45th (R.I.P.), a great big old record store, and my mom made me choose between this, Nick Lowe’s second solo album (after playing with pub rockers Brinsley Schwarz, which I still don’t think I’ve heard to this day, and while he produced Elvis Costello’s first few amazing records), and The Clash’s Give ‘Em Enough Rope. A hard choice, but Labour Of Lust became my 13th birthday present.

Up until that purchase, it had mostly been all Queen and Heart and such for me. One day in 1978, I heard “Somebody’s Gonna Get Their Head Kicked In Tonight” on the radio when some rednecks from Walla Walla were making fun of it for an April Fool’s Joke as they did their radio shift. I expected to hear Dr. Demento that Sunday evening, but discovered The Rezillos instead. And I started to think of myself as “punk,” but that meant listening to the end of “Bohemian Rhapsody” over and over, you know, the part where it gets really aggressive.

Though I had my older brothers’ Runaways and Lou Reed and David Bowie albums, I didn’t have my own thing yet. Labour Of Lust sounded like it was the start of something I really wanted to be. It sounded like cool guys in flannel shirts and tight jeans making music for themselves, not concerned with the bands full of congo players and back up singers on Midnight Special.

I remembered in the store that a really British guy (as British as Monty Python! But sounding as American as The Byrds!) named Nick Lowe was all over the radio with a new, really creepy hit called “Cruel To Be Kind.” It was really self-deprecative, a bit offensive, and catchy as hell, and somehow had more musically to do with the Buddy Holly and John Lennon I’d overheard than the Doobie Brothers and Robbie Dupree played around it on Top 40. Being a twisted little kid, I knew exactly what the double entendres in the song meant, but after my mom bought me the album, I got introduced to a whole new world of adolescent skeeve-out: getting strung out and going crazy (“Cracking Up,” which kind of reminded me of that somewhat cool Tom Petty guy also hanging around the airwaves at the time); oblique references to drugs (the never-heard-anything-like-it-before Krautpop-minimalist-funk of “Big Kick, Plain Scrap”); screwing foreign — my country’s! — groupies with sadistic glee (“American Squirm”); boner jokes (“Switchboard Susan”); STDs (“Dose of You”); et al. Somehow, you don’t remember these hastily offensive scenarios; what stays in the mind are the great hooks, riffs, and perfect rhythms of the band Rockpile, which backs Lowe throughout.

But really, even though I played this album CONSTANTLY as a 13 year old, I knew the somewhat weird and realistically wasted lyrics were a small part of it. It was about the sumptuous palette of wide power pop-cum-C&W-rockabilly treats spread throughout, even showing off a vocals-and-acoustic only ballad (“You Make Me”) which horrified my punk-expectant ears. That was good for me.

At times, I wished I’d gone with Give ‘Em Enough Rope instead; but that was soon to happen anyways, and Lowe offered up a joy in timeless songcraft that connected me from my first love, The Monkees (the covers even looked a little like their Headquarters LP, all white and sloppy-hippy mod) to what was happening now (then). I think I needed that bridge, though I would later go on to find that Lowe’s first album, Jesus Of Cool (Pure Pop For Now People in the States) was superior in terms of satirical songwriting and punk-era musical bite.

Still, Labour Of Love was my first, and I don’t regret that. Soon, it would be the more philosophically extrapolative and subversively ironic Armed Forces (also produced expertly by Lowe), Blondie, and then very soon London Calling (but that’s a whole other story there I guess). As for Lowe, this was his last great album; sadly, it was only his second. It seems shallow to say, but the haggard, extremely casual, shambolic photos of him on the cover and inner sleeves of Labour Of Love, sort of foretold he didn’t give a shit about fashion or what was happening outside the recording studios he labored in so passionately.

Lowe’s lyrics are about the fucked up and the far from fabulous, but his recording style with Costello, himself, and others was a sort of lo-fi Roy Thomas Baker, which seems very 70s but also eternally kind of sweetly sleazy. (I wish he could have done a Cheap Trick LP.) Lots of flange, deep bass, tricks of all sorts, but hilariously at odds with the sods in his stories.

I never bought another Lowe full length. It may seem cruel, but there was Psychedelic Furs and the Dead Kennedys and so many other new bands to keep up with as the decade turned. I got a couple for review early on as I started to do a zine, and they were good. But I was glad then I didn’t pay for them. But I would pay for Labour Of Lust in a heartbeat: It’s hard to imagine a Three Imaginary Girls without its smorgasbord of full-on proto-indie (“Love So Fine”), genre-breaking underground hard rock (“Born Fighter”), etc.

One thing (young) Americans should know though that other reviews of this aren’t mentioning, is that “Endless Grey Ribbon,” which is on this brilliant Yep Roc reissue, was UK only. (The reissue is worth buying instead of a vintage copy too for the amazing liner notes as well.) It’s great that that song is here, but it’s also a little more mature in tone and content than what we in the States got when we originally bought Labour; also is the bonus B-side included, “Basing Street.”

These are quiet, sincere protest songs about anxious lives coming apart that wouldn’t be really appropriate for even the alternative market until the coming of songwriters like John Vanderslice or John Roderick. They’re all adult narrative, and obviously kept from immature listeners in the States for a reason (probably). Here they both are though. But me, I was satisfied enough with the sweeping, disingenuous, grand meanness of “American Squirm” or “Skin Deep” than anything else I’d heard since the late 60s. (GOD I’M OLD.) It still sounds like pure gold scuffed up by neglected spirits, working hard to make tunes maybe no one will ever hear outside of pubs and venues that come and go. Respect your elder (reissues): Don’t miss this indie pop soul music.