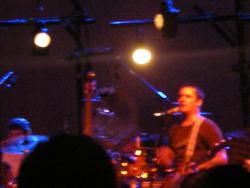 All kinds of hype surrounded this Modest Mouse show. It was announced on only a few days' notice, there was a crush to get tickets (the event was rumored to be sold out during the pre-sale phase), and this would be the first time local fans got to glimpse Modest Mouse joined by ex-Smiths guitarist Johnny Marr. But for all the excitement surrounding the gig, the actual show was, well, a bit boring.

The venue, The South Lake Union Naval Hall, was surprisingly pretty awesome. I figured this place was the only space available in town on such short notice. I expected horrible sound and general pandemonium over how to turn a hall into a rock club. The confusion element was there, and security seemed overly aggressive for such an intimate show, wending through the crowd with ear-pieces and striking down anyone who dared to raise a camera to capture a pic (self included). Yet the folks taking tickets were surprisingly lax. We'd printed our own through ticketbastard, and there wasn't even a scanner present to ensure the ticket's legitimacy. The guy simply took my printout and tore it up, allowing us to resume entry. (Just think how many scalpers could've profited had they known that fact in advance…)

Of course the venue played on the nautical motif of We Were Dead Before The Ship Even Sank, with its close proximity to the lake and being a Naval hall and all (Modest Mouse's video for "Dashboard" furthers this ode to the seas). The stage sat at one end of this hall, feeling more like a high school gymnasium. In fact the whole show had the distinct air of being just that, a high school dance: informal, a smidge cliquish, and held on wood floors. The only thing missing were the festoons of a dance — I personally would've played up the seaside theme, swirling blue streamers and faux anchors from the balcony's railings…

The band walked on stage and went right into "Ocean Breathes Salty" from 2004's Good News… and into a handful more tunes before ever addressing the crowd. When frontman Isaac Brock finally took a moment to acknowledge the 1100+ fans, he bantered with the crowd about who had paid actual money to see this show versus who waltzed in on someone else's dime, seemingly unaware of how we even got there ("So, did you all win a contest or something?"). I thought it odd that he seemed unaware of how this whole thing went down. Given the sporadic nature with which the show was announced, I just assumed the band wanted to throw a CD release party with local fans, to celebrate the release of We Were Dead Before The Ship Even Sank. I guess that could still be what occurred, though the fact that Brock didn't seem to know whether we were actually fans or lucky winners surprised me. (On second thought, perhaps Brock's question was a smart one. The crowd — at least those surrounding me and my guy — didn't seem too enthusiastic about being there either. Maybe we were some of the only ones there who actually wanted to hear the music, rather than just attend a free show with won tickets, or report on it in the next day's blog…)

Whatever the case, Modest Mouse spent the evening visiting various stops along their musical career, with tracks from 1997's The Lonesome Crowded West up through the new album. Despite spanning the gamut of their releases, the set was disjointed. They'd go from a poppy number like "Float On" right into the freakout cacophony that is "Tiny Cities Made of Ashes," then right back into the subdued bliss of "Little Motels." And the band's energy peaked and valleyed in just the same manner: "Doin' the Cockroach" was simply stunning, Brock spitting out the words, the band jamming in a swirl of rhythm around him. But "Float On," the track that pushed Modest Mouse into crossover territory, was delivered rote, unimpassioned.

The band's original threesome (Brock, Eric Judy, and Jeremiah Green) is up to six members now. They've had a penchant for odd sounds and rare instrumentation over the years, represented on this night with an accordion, a bugle, a string bass, a banjo, and a second full drumset appearing on stage. Crazy instrumentation aside, the honest reason I wanted to get tickets to this show was to finally see how they'd jive with Marr. Long ago I'd heard the rumor that he was joining the chaps from Issaquah, and I was truly anxious to see how this would all play out.

Marr's influence — while hugely impactful on our generation's music — was surprisingly minimal in the live setting. Don't get me wrong: it was simply amazing to see one of the four pillars from my all-time fave band up on stage with the boys from the ‘quah (In fact I kept reaching over to my guy, exclaiming "That's Johnny freakin' Marr!"). But it was interesting to watch the dynamic between The Legend Marr and The Band Leader Brock. During the extended jam of "Cockroach" (which they absolutely slayed), it was Marr looking to Brock to determine when the song's abrupt end would occur. I'd think that a lot of pressure, to have Johnny Marr looking to you for the cues. And Marr — despite being recently touted as the clean one to Brock's less-than-sober approach to life — looked a bit, well, aged. Worn. Drawn. Guess it's all those years of having to play side by side with the volatile Mozzer.

All in all, I'm glad I went, if only for the chance to be in the same room as Marr and be a part of a much-sought-after show… but here's hoping they step it up a bit for their upcoming Paramount gig.