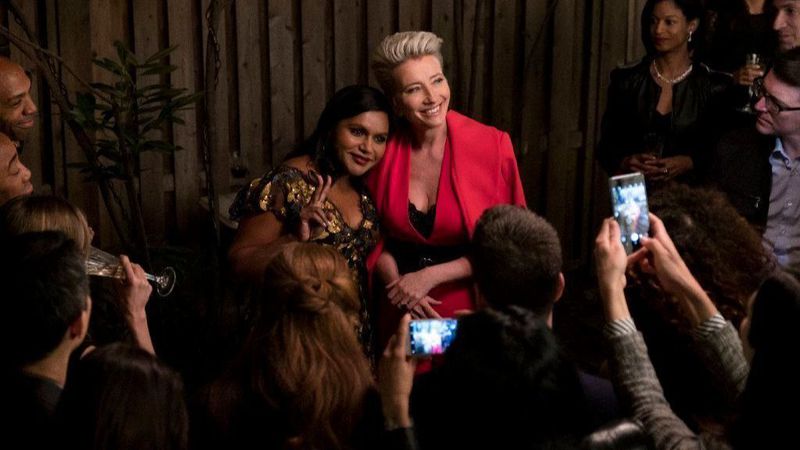 First, Emma Thompson can do NO wrong. Second, Mindy Kaling (as you may already know) is super lovable. Third, Late Night is a ridiculously charming comedic fantasy.

You’ve no doubt seen the trailer, so you’ve gotten the gist of the story: Katherine Newbury (Thompson) has been successfully hosting her Late Night show for TWENTY-SEVEN years – but the new head of the network, Caroline Morton (Amy Ryan) isn’t happy with the slipping ratings and intends to replace her with walking toxic masculinity a male shock comic.

When it’s suggested to Katherine that maybe the problem is that her writing staff is filled with straight, white, men, she tells her assistant Brad (Denis O’Hare) to hire a woman ASAP. Enter Molly Patel (Kaling), a chemical plant worker trying to make her comedy writing dreams happen in NYC. Pressed for time, Brad hires Molly on the spot – choosing her over a trust-fund baby whose brother is already on the payroll – and comedy ensues.

Katherine is, of course, initially tough on Molly, but after Molly saves her from bad press quotes plus starts saving the show with her killer jokes and on-the-street skit ideas, the two become … sort-of? reluctant friends? Or something. In the meantime, Molly struggles to fit in with the boys, and enjoys a maybe-romance with handsome writer Charlie (Hugh Dancy) while Katherine tries to make herself relevant — until a BIG SCANDALOUS REVEAL! In which she almost loses everything including her husband (hi, John Lithgow! I heart you).

While I wished for Late Night to be more groundbreaking than it actually was (although honestly having a woman writer, woman director, and women stars that cross age and diversity lines is pretty groundbreaking already) – it was still hella enjoyable and I laughed, like, a LOT.

Listen, my cynical brain finds almost nothing about this movie believable: Molly getting hired with zero experience; Katherine being a successful woman comic in the 1980s and then hosting a late night show for almost 30 years; every man in the writer’s room (or really, the film) being a walking stereotype; what happens with the scandalous reveal (funny how I accepted a similar plot line on Billions as being totally believable – because it happens to a man) — NONE of it makes any sense, and none of it would actually happen in the real world.

But I’m okay with that! Sometimes you just want that magical, fantastical almost-fairy tale movie that you can laugh at with a good friend. I did that with mine, and we left the film with extremely good feelings; our reverence for Emma intact.