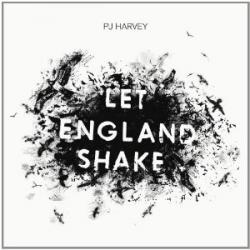 It’s been a few years, and to be succinct, what we have here is another outstanding album by PJ Harvey. Upon first listen, I have to admit that I had some doubts. I wasn’t quite sure if I was going to be moved by this one, despite the intriguing circumstances: it’s rather bleak, thematically striking, and more or less features her stunning To Bring You My Love band (John Parish and Mick Harvey). All it took was a few more listens to seal my opinion that Let England Shake is another Harvey classic to add to her already impressive cannon.

As is usually the case, this record is rather different from her previous releases. Vocally, Harvey tends to sing in a higher register – not unlike her approach in White Chalk, which is sonically where Let England Shake is the most similar. Both albums are brutally stark too, with death as an integral thread. The difference here, however, is where the former was devastingly personal with the issue of death relating to family and dying relationships, the new release deals with death in universally objective terms. The central theme this time around is war, especially as it relates to the history and politics of England.

“Goddam’ Europeans!|Take me back to England|& the grey damp filthiness of ages…” This bittersweet passage is how “The Last Living Rose” opens, accompanied by a single simple guitar line before drums punctuate the melody. Before long, a saxophone and trombone are added to the mix. This is precisely where I wasn’t sure if this album was going to work. Not typically being a fan of brass, I thought that Harvey might have taken it a little too far on this arrangement, but in the end it works – as at least the involvement of horns is subtle. They are acutally strewn across the LP to a minimal extent, which almost adds a hint of military gloss to the music. As one would expect, Harvey keeps her song structures down to a basic level. Excessive arrangements have never been part of her craft.

“In the Dark Places” is a timeless number that emanates with the characteristics her greatest tracks. The garage guitar instantly brings the listener back to familiar ground. Again, simplicity works best for Harvey and the arrangement of the guitar, drums and bass are as such. Here, the lyrical content deals with the futility of battle. “We got up early, washed our faces, walked the fields and put up crosses|Passed through the damned mountains, went hellwards, and some of us returned, and some of us did not.” The subject of war is addressed in somber terms as if this is just the way that it is and will always be. There is no reason to fight, and yet there is no reason not to fight either. This is a soldier’s life, canvassed briefly in a beautiful song.

PJ Harvey never repeats herself, and yet in her constant evolution, she rarely takes an awkward step. She has the landmark of a great artist in that she continually moves forward in new directions without abandoning her original vision. That vision is the ability to make fairly uncomplicated songs that are sophisticated, memorable, and at the same time emotionally moving. For a woman who is so drawn to and inspired by death, her music continues to effervesce with incredible vitality.