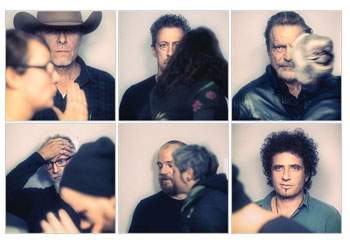 Live Show Recommendation: Swans at The Neptune Theatre this Friday

Swans have been around since the early 1980s and have undergone a fair amount of lineup changes over the years. They have also weaved through an evolution of sound from their colossally heavy pre-industrial early years to their more melodic and complex middle years to the intoxicatingly beautiful extended compositions on their last original album, Soundtracks for the Blind (1997). In the present day, their post-2010 reformation records fall somewhere in between the original phases. Despite the ups and downs of the music industry and the coming and going of ceaseless trends, Swans have always stayed true to their original artistic vision and have been incredibly consistent, remaining in their own world, quite removed from anything within the mainstream of both the major and independent record labels. Principle songwriter and band-leader, Michael Gira, says that this is the final tour of the current incarnation of the band. It is difficult to predict what will come next, but this Friday, 25th August, will be the last chance to see this version of the group live. They will be gracing the stage at The Neptune Theatre for this rendition’s final Seattle performance.

Since Swans re-grouped and released My Father Will Guide Me Up a Rope to the Sky in 2010, their live sets have focused on only a handful of lengthy songs that build and often last for twenty to thirty minutes each. Gira’s record label, Young God Records, has recently reissued some of the band’s absolute best records: White Light from the Mouth of Infinity (1991), Love of Life (1992) and The Great Annihilator (1995). At this point, most of their back-catalog is now in print, something that has not been the case for many years. Perhaps with this concluding tour they will stray a little from the format of the last several years and add a few classic songs into their setlist? This would certainly make for a memorable evening.

Whatever the case may be, longtime fans and newly converted attendees will get to experience Swans within the comfortable atmosphere and excellent acoustics of The Neptune Theatre for the first time. The last few shows have been at The Showbox and Neumos, so this is also a welcome change. The Neptune seems like the perfect setting for the band to bow out for the time-being before venturing into their next transition.