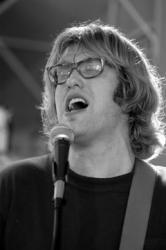 A Long Winters reason to celebrate

Ten years ago today, The Long Winters performed three shows in three Sonic Boom Record shops in a single day.  It was a mini-tour to celebrate the release of their brilliant record, When I Pretend To Fall... and it was just as amazingly fun as we dreamed it would be.

Thankfully we can relive the magic because imaginary dana documented the whole day (back in the day).  She definitely earned that limited edition 'tour' t-shirt.

Imaginary. You could call it that.

We all know good things come in threes. It took a band as brilliant as the Long Winters to finally think of playing at all three fabula-riffic Sonic Boom Record stores in one day, to promote the release of their long-awaited sophomore release When I Pretend to Fall. I was determined to follow them all day like the Dead Head I never was, and not just because I wanted to get the limited edition Long Winters Sonic Boom tour t-shirt, either.

I was there because I am a Long Winters superfan. {There, I've said it}. And that is just what superfans do.

{read the whole article… with photos!}

Hat tip to John Roderick's kind tweet linking to this article a couple days ago (which reminded us of this special date).

Speaking of rad John Roderick-related things… are you a diehard fan of the Roderick On The Line podcast yet?  Add it to your queue; you can thank me later.  And that way you'll be prepared to join in my Roderick On The Line discussion group / email thread / chat line once I get it up and running.  If you are too overwhelmed to start at the beginning, you can test it out by trying episode 24: The Wrong Mustache or episode 17: Antisocially Promoted.