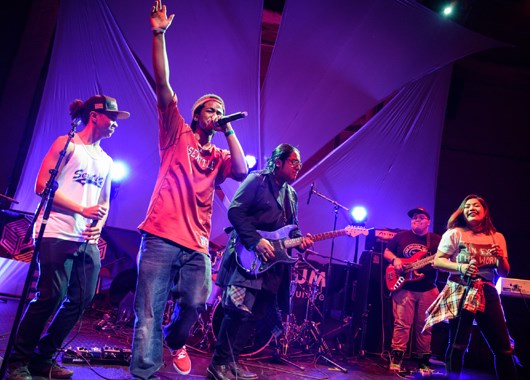 Looking forward to the Sound Off! 2016 Finals after my mind was blown last weekend

I had the extreme honor of being a judges this past Saturday at the last semifinal round in this year’s EMP’s Sound Off!.

I knew I had my work cut out for me. Every Sound Off! show I’ve seen over the last 15 years has featured one astounding young band after another.  After all, bands like Kithkin, Schoolyard Heroes, Idiot Pilot, SEACATS and The Lonely Forest are Sound Off! alums.

Each band was my favorite for a different reason.

This coming Saturday is the Sound Off! FINALS show in which the winning performers from each of the last three weeks’ semifinals and one wild card winner compete for the title of Sound Off! 2016 grand prize.

The finals line-up this Saturday, March 5, 2016 will consist of:

Although I missed her semifinals performance, I’m most interested in seeing Paris Alexa’s set. Multiple people have told me how they are still astounded by her performance.

Considering the caliber of the bands I saw last weekend, I’m expecting I’ll be saying the same thing about all the bands competing after this Saturday’s finals show.