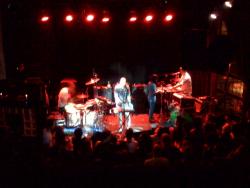 Loopin' & Boopin' to The Field and The Juan MacLean

I first saw Sean Horton, otherwise known as DJ Nordic Soul, perform at the Moderat/Truckasaurus show last month and really felt that his DJing was one of the highlights of the entire gig. He transitioned from slow and easy to bass-thumping rhythms, spinning treasures like Gui Boratto, Mu, Justice and Modeselektor. With that listing of tracks, I think I’ve found my DJ of choice in Mr. Nordic Soul.

Last year The Field, aka Axel Willner, packed Chop Suey with sweaty dancing bodies in support of his abso-fucking-lutely stellar ’07 release From Here We Go To Sublime. I had a second opportunity to see him at Nectar last night in support of the Juan MacLean, and while the intensity of the show wasn’t up to par from his previous Seattle performance, he was an apt supporting slot for DFA disco-queens The Juan MacLean.

Electronic music, especially blissed-out minimalist techno, isn’t usually much for the indie rock spotlight. Crossover dance-punk bands garner kudos of attention but artists like The Field rarely cross over into familiarity within those circles. The Field did that, and more (in part due to the glowing P4K review of their last album). The Field’s pool of influences runs deep and in no situation is that more evident than their live show. Wisps of My Bloody Valentine and Can reveal themselves amidst the straight 4/4 repetitiveness that makes his music so enrapturing.

You could get lost in these beats if you weren’t careful, and that’s exactly what he aims to lure you into doing with his sleek monotony and infectious vocal loops. His sequencing is perfection, rendering what could be considered dance music for theIDMers. John Stanier of Battles drummed on his latest album and accompanies him on tour, with two other band members, creating a more bombastic depth of sound.

The Juan MacLean, mostly-duo Nancy Whang and John MacLane (who looks an awfully lot like THAT John MacLane, as IGer ChrisB pointed out), are a pure and true example of what a DFA band sounds like. There’s the post-disco push, sexy female vocals and pop sensibility that infiltrate virtually every DFA release. This is a band of multi-taskers (no doubt setting themselves up for an ADD-infused future, but having a blast in the process), John switching from theremin to cowbell and back again and Nancy taking her turn on the keys, vocals and shaker, while the rest of the band was equally frenetic with their multi-instrumentations.

Their sound is snazzy and brassy, and the crowd wailed at each upturn, frothed and prepared by the capable The Field beforehand. Nancy strutted in her blue jumpsuit, faintly grooving to the creepy blip of the keyboards and adding more than her two cents in vocal sweetness. The absolute highlight of their set was their lauded hit “Happy House”, the fully extended version, clocking in at nearly double the album version. This song alone would have satisfied the audience, as was evident by their jubilant response to the climax, only to be worked up into another and then another peak.

The Juan MacLean’s electro-pop is a crowd-pleaser. John and Nancy are equally matched, sharing vocal and songwriting duties, meshing to form a whole greater than it’s parts. And for better or worse, I kept having flashbacks of the LCD Soundsystem performance I experienced at the Showbox. Their sound is remarkably similar, but I can’t complain: that LCD show was one of the best of my life. Next time a DFA band rolls through town you bet your britches I’ll be there. I couldn’t possibly pass up such a consistent, downright exciting live show… and you shouldn’t either.