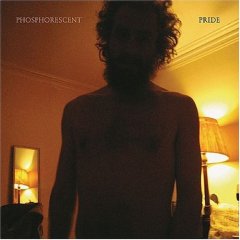 Midway through the recording of Pride, Matthew Houck, the man behind Phosphorescent, decided to migrate from Athens, Georgia to Brooklyn, New York. The change of scene proved to be advantageous; Houck instantly picked up where he left off and finished the album with renewed inspiration. This is Phosphorescent’s third full-length release, following 2005's Aw Come Aw.

There is an almost sacred resonance evoked by the hymn-like quality of the vocals on Pride. Before ending up in Athens, Houck grew up in Alabama, and these southern roots permeate his work. There is a mood to the music that recalls a kind of Southern pastoral climate, with vocals that channel a remote but intimate sense of loneliness and abandonment. It is no surprise that this paramount solitude manifests itself so clearly in the songs, since Matthew Houck recorded almost the entire record by himself, using only the help of an assembled choir for some backing vocal assistance on three of the eight tracks.

What emerges is a singer-songwriter approach to the LP, which comes across as an isolated folk record that works best while driving on the freeway or while listening late at night. The choral aspects also make it suitable for a lazy Sunday morning over coffee. "My Dove, My Lamb" is an example of the overall feel of Pride. The chorus vocals are soft and almost angelic behind the Southern rasp of Houck's voice. An acoustic guitar strums slowly as the rhythm instrument, and a bluesy harmonica coughs and wheezes between lead vocals. When the chorus joins in, the atmosphere morphs from sorrow to exultation.

The strangest song on the album is entitled "At Death, A Proclamation." The composition lasts less than two minutes, but it provides a fabulous diversion from the core sound and style of Pride. Anxious drumming and noisy electric drone guitar chug along like a mystery train in what is by far the darkest and possibly strongest part of the disc. It is the unexpected storm that quickly retreats before there is
a break in the clouds and calm settles in once again.

Fans of contemporary folk artists such as Devendra Banhart, Espers, and Vetiver will find Pride to be right up their alley.