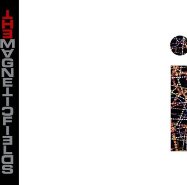 Stephin Merritt was wise in waiting five years to follow up his last Magnetic Fields record, 69 Love Songs and . Releasing a mere single 14-song CD in the aftermath of that 3-disc genre-hopping behemoth could only have led to disappointed expectations. Not that Merritt was biding his time — in the interim he has released albums by his side projects the 6thsFuture Bible Heroes and composed scores for several indie films.

And now, judging that the world is ready once again for the Magnetic Fields, Merritt has released I, similar to Love Songs in its loose thematic ties and stylistic explorations, but scaled down to a more manageable size. Appropriately titled, every song here begins with the letter I, though the collection is not as narcissistic as that would imply. (The exception is the over-the-top braggadocio of "I Thought You Were My Boyfriend": "Love or not, I've always got/Ten guys on whom I can depend/And if you're not mine/One less is nine; Get wise.")

The main idiosyncrasy of this album is Merritt's decision to go sans synth, then treat the instruments electronically, so that much of the time they come out sounding synth-like anyway. The band here resembles a small chamber-pop ensemble, mainly consisting of cello, guitar and drums, abetted by the occasional piano. The result is a sparse, intimate framework for the lyrics and Merritt's monotone bass growl. And the songwriter's fabled wordplay is on full display, in particular on the sublimely poppy "I Don't Believe You": "So you quote love unquote me/Well, stranger things have come to be", "So you're brilliant gorgeous and/Ampersand after ampersand." The music-hall influence becomes explicit in "I'm Tongue-Tied," conjuring the image of a down-on-his-luck Cole Porter reduced to performing with a tiny pick-up band on a vaudeville stage. In other experiments outside of the strict pop format, "In an Operetta" pays tribute to that form with a dainty harpsichord melody, and the lyrics of "Irma" are broken mid-phrase to conform to its tick-tock banjo rhythm.

The Fields' trademark melancholy pervades the album, from the woe-is-me "I Was Born" to the noir atmospherics of "Infinitely Late at Night." But Merritt manages to grin through his tears, telling tales of forlorn, loveless circus clowns, and evil twins. Prolific though he may be, Merritt shows no signs of running out of ideas.