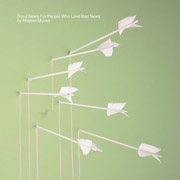 Take away my black studded belt and my Chuck Taylors because I'm going to admit something very anti-Indie: I've never been a Modest Mouse fanatic. Yeah, I think they're doing interesting stuff. Yeah, they're very talented. Yeah, they're local. But if given the choice between Modest Mouse and Death Cab {or any of the other behemoths of Seattle indie-rock}, ten times out of ten I'm going to choose the latter.

Well, at least that's what I would have said pre-April 2004 — before Good News For People Who Love Bad News was released. One unassuming day, while I was driving to the local sub shop on my lunch break, my stupid CD player refused to play my Her Space Holiday CD {perhaps it was subtly trying to tell me something?}, so I switched to the radio. As I was seeking through the stations, I heard a familiar voice and stopped. Even though my stomach growled in protest, I was compelled to stay in my parked car at the sub shop until the song was over. I almost crapped my pants when the DJ announced the song had been Modest Mouse. If that wasn't enough shock, I looked down at the dial and realized I was listening to The Mountain. It's true: Not only was I forgoing food for a song, I was forgoing food for a Modest Mouse song. And not only was it a Modest Mouse song, it was a Modest Mouse song playing on The Mountain-fresh station. I pulled out my pocket calendar and wrote "hell froze over" on that day.

Back at the office, semi—recovered from the shock, I had lunch at my desk so I could listen to Good News For People Who Love Bad News in its entirety on Rhapsody. It's very rare that anything could pique my interest on an empty, sober stomach {well, except food and booze}, but Modest Mouse did it. With intense field research I have discovered that not only does GNFPWLBN {sheesh, I need a freakin' acronym for that acronym} sound great on an empty stomach, it sounds even better on a full stomach. And on a full stomach after five adult beverages it's the most brilliant thing I've ever heard.

That's when I began waiting: Waiting for my mother to call me up to ask me if I've heard the newest Modest Mouse album; waiting for all of my much cooler Modest Mouse-loving friends to tell me GNFPWLBN is the biggest sell out album since Liz Phair's latest self-titled release. I waited, but it didn't happen. Moms everywhere still think Modest Mouse is a rodent who doesn't show her ankles, and the cool kids still love them with the same virility they always have.

GNFPWLBN still features Isaac Brock's classic, emotionally manic vocals wafting over the same strange, distorted, folk-tinged backbone, but some kind of brilliant magic has happened: Modest Mouse becomes fatter in this album {make sure when you read that last sentence, that you're thinking aurally, not visually}. Their sound is thicker, more palatable, easier to swallow, less abrasive and more intriguing. But fear not indie rocker, they still have the same distinct Modest Mouse sound. Each song sounds uniquely different, uniquely Modest Mouse and… well… unique, which makes it difficult to generalize about the album as a whole. That being said, here are a few highlights:

"The World at Large's" sweet fragile quivering of Isaac's voice and the bizarre flute twinkles make me feel pretty.

You'll love the obnoxious "Dance Hall" song for its unbridled breathless screaming of unintelligible lyrics and mind numbing pounding of the drums. Then you'll hate it; then you'll love all over again.

"This Devil's Workday" is a theatrical tidbit featuring burlesque blaring horns and pirate-like chanting lyrics. It's strange and I love it.

My favorite track is "Ocean Breathes Salty," with its spacey surf guitar, its anthemic "That is that and this is this" catchy refrain and its abrupt ending which leaves you wondering what just happened.

Runner up for my favorite is "Black Cadillacs." You need to be ultra aware of your surroundings while you enjoy this song — while I was taking a summer drive with my windows down, "Black Cadillacs" blaring at a stoplight, I got a tad caught up in the song and realized I was chanting {quite loudly to compete with the radio} "We were duh-duh-duh-ne with all the fuh-fuh-fuh-kin' around." I don't think the family of four trapped in the car next to me really cared that I was "done with all the fuckin' around." In fact, I think they were "duh-duh-duh-ne with me" because they rolled up their windows. Nope, the moms definitely aren't listening to the Modest Mouse. But you Indie Rockers are going to love it!