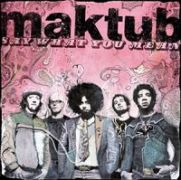 Say What You Mean

You probably have friends who don't like country music, but love Johnny Cash. Or perhaps they don't like reggae, but love Bob Marley; or they don't vote Republican, but admire John McCain's stance on Campaign Finance Reform.

Likewise, Maktub play funk and soul for both the lovers and the fighters of funk and soul music. I'm marginally in the latter category. But enjoying Say What You Mean, the new third record from one of Seattle's most popular bands, is just so easy. It's so smooth; it's so sexy; it's so right. It's just so. It all boils down to the amazing charisma of frontman Reggie Watts.

Watts exudes confidence, charm, and oozing warmth. When I caught his solo act at Neumo's a couple of weeks ago, I was blown away by his set — which was more improv and performance art than, "uh, this is the second song on our new record — you can find it at the merch table over there." His between-song banter was spontaneous as it was hilarious. He introduced his drummer Davis Martin (who is also in Maktub) as a "Level 7 Ranger," and I'm pretty sure he had at least one song in his set about Dungeons and Dragons.

Although the D&D song didn’t make it on Say What You Mean, in its place are tracks that make Lovage sound so 2004. Watt's dulcet voice enervates every song with mesmerizing sensuality, seemingly channeling Marvin Gaye at his "Let's Get it On" best.

On first listen, "Hunt You Down" might not sound like much different from a typical indie pop song whining about a love that got away, but with Watts's obvious charm and a backing female vocalist playing against his pleas, it quickly builds into the album's most compelling track. "20 Years" has hooks that evoke the flavors of your favorite 80s anthemtic rock standards. And the track "Seeing Is Believing," with its heavy-guitar driven intro and passionate vocal delivery, sounds like what Lenny Kravitz should be like if described by a sycophantic fan (with Maktub, however, there time is spent crafting their music and not dating movie stars, so you're likely not to be let down).