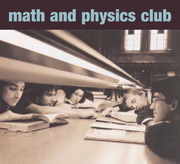 Emotions are a funny thing. You hear a lot about them when you're out and about, and they seem to have a lot of sway in daily life. However, some emotions are just underappreciated. I suppose "appreciation" is an emotion in itself (or is it a state of being?), but the point is, certain emotions deserve a little more respect.

Case in point: let's have three cheers for melancholy! (Hip hip… *sigh*). The definition of "melancholy" is, "thoughtful of gentle sadness." Now, really, what's wrong with that? I'm 100% behind melancholy! With a little help from Seattle's own Math & Physics Club, you will be too, and you won't mind as you wistfully stare out into the impending rain and grey of a Pacific Northwest winter.

Math & Physics Club is the debut self-titled album from these Belle & Sebastian descendents that strive towards gentle melodies, softly caressing guitars, and vocals delivered with such a quiet effectiveness that Stuart Murdoch might think about suing over copyright infringement. However, where Belle & Sebastian has gotten itself lost in either being far too hushed for its own good or becoming a full-on 60's pop band, Math & Physics Club have mastered the ability to fill a room with sound without filling the room with too much sound. A perfect example leads off the album, where Kevin's gently brushed drums, lilting vocals from Charles, and an organ solo combine into the perfect fall song "Darling, Please Come Home."

And if you're in the market for passion, look no further than "I Know What I Want," where Charles sings "I know what I want/and it's you." The sweetness just keeps coming on "April Showers," which starts right off with "There is no place I'd rather be/than you right next to me/huddled up under my umbrella" (an advantage of Seattle, I'll give it that). Again, there's such synergy Math & Physics Club have between the vocals, James' smoothly plucked guitars that echo into the air, and the playful drums that keep the songs from descending into "sad bastard" territory.

"La La La Lisa" is one of the gems of Math & Physics Club, a tale of crushes and lack of confidence when trying to talk to ladies, with lines like "There's just something about a girl with a bass guitar." It's the perfect indie rock love song — I mean, where else will you find a girl described as having "The prettiest eyes/they were black like her lips"? — but it's all from afar because Lisa only goes with older kids. The melancholy here is flawless: the joy of that ideal love tempered by the realism of actually, you know, working up the nerve to do anything about it.

"Look at Us Now" starts with Saundrah's violins, which dance with the guitars in the closest thing to being an outtake from If You're Feeling Sinister. It has that rare gift that the Smiths had in spades of combining incongruous light and cheery music with really sad lyrics ("We were in love/but look at us now.") The same can be said for "Cold as Minnesota," which is a surprisingly bitter song of a break-up, couched in a foot-tapping number that features 60's beats and catchy basslines that contradict the lyrics.

The album closes on the appropriately titled "Last Dance," a song that advocates not worrying about the problems in a relationship with the advice "Let's put the past behind/and let's hit the floor before the last dance." The song is the great closer for any album that seems to shout (well, well, not shout as much as quietly suggest) that life is a lot less down than advertised if you have the right attitude.