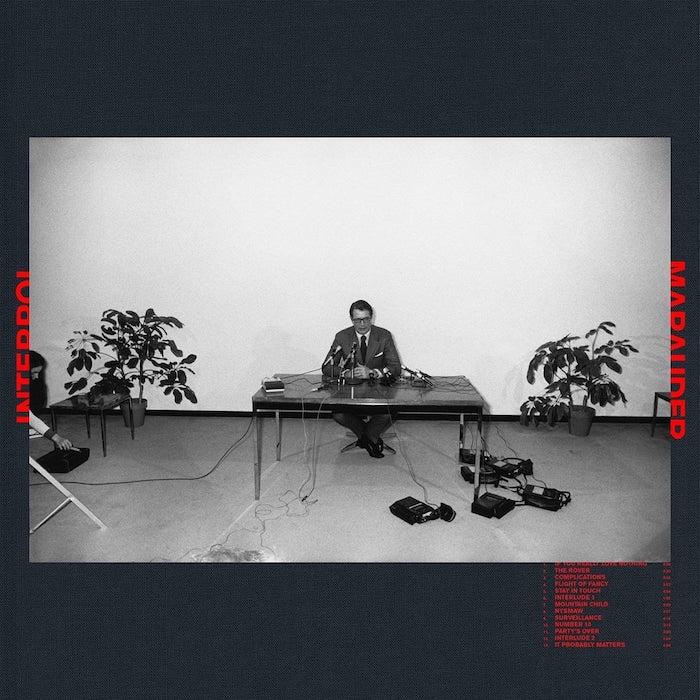 Interpol’s last attempt at experimenting, their 2010 self-titled, face planted. During the recording of that record the band’s bassist Carlos Dengler left the group and the three remaining members salvaged what they could from those sessions. It’s not a terrible album, it just doesn’t hold up alongside the rest of the group’s discography. El Pintor, the 2014 follow up, played it relatively safe with a back to basics formula that’s reminiscent of their sophomore effort, Antics. Last year’s Marauder attempts to capture a “live” sound but misses the mark.

The album boasts being recorded to tape with limited takes. Yet somewhere along the way the production homogenized each song in a grayscale. What would have been a series of varying moods and atmospheres on any other Interpol record becomes a blob of songs that goes rolling by. Dengler has never been missed more as the bass is almost nowhere to be found. The bad mix is disappointing because the majority of Marauder’s tracks are great tunes that will hold their own in a setlist with Interpol’s most beloved songs.

“Real Life”, a new track that made its live debut in 2017 and quickly became a fan favorite, is noticeably absent. The band cut it from Marauder for not fitting with the rest of the tracklist and wanting to keep the album concise. Yet there was still room for two very skippable interludes. Some of Interpol’s best material is b-sides and deep cuts, at least there’s hope for some more of those.

The band had a more experimental edge earlier in their career. Songs like “Untitled” and “The New” featured hypnotic instrumental passages and sparse vocals. An early version of “A Time To Be So Small” has an underwater vocal effect on Paul Banks’ voice, while “Specialist” chugs along like a train car teetering off the rails, Banks’ mouthful of wordy lyrics the only thing keeping it on the tracks. There was once a recipe for exceptional Interpol songs.

When the group brushes up against that old formula Marauder shines the brightest. The slow-burning intro to “Number 10” is worth the wait, “NYSMAW” benefits from a spooky vocal effect during the bridge and an earworm melody during the chorus, while “Mountain Child” and “It Probably Matters” both end in cacophonies that flirt with shoegaze. Though it wouldn’t be an Interpol album without at least one lyrical blunder. This time around we get, “Rock ‘n’ roll bitch, I’m into it / I like to show you my stuff” halfway through “Party’s Over.”

Interpol is about to become “a band from twenty years ago.” There’s no reason to expect a group who’s been around for that long to keep making new waves in the mainstream. The cultural zeitgeist has moved on and Interpol has a dedicated base of forever fans, which they pay service to. We got a fifteenth-anniversary tour of Turn On The Bright Lights, years of consistent setlists with room for deep cuts, and an album rollout in Mexico—a nation with a surprising amount of Interpol diehards. The fan service pays; the Interpol devotees are legion. Their Moore Theatre show on Feb. 2nd is already sold out. As long as the songs are good and moody, Interpol doesn’t have a thing to worry about.