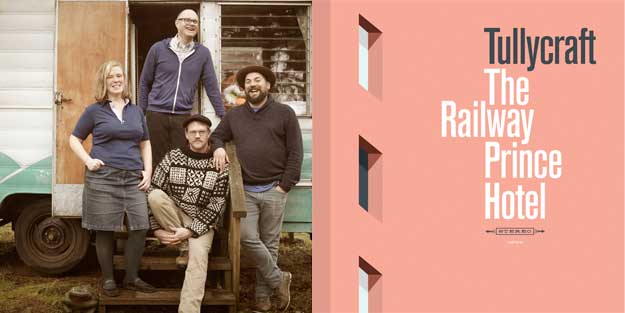 Thanks to my extremely close relationship with each member of Tullycraft, I’ve been lucky enough to listen to their latest batch of songs on repeat for a while now. I’ve been counting the days until I get to discuss the band’s new songs with you and so I’m overjoyed to finally make a huge headline proclamation about the release of their new album, The Railway Prince Hotel.

It’s the Seattle band’s seventh album and it’s packed with all the snappy riffs, wit, and reference-packed lyrics we love them for. This time, they’ve taken things up a notch; Rather than picking a fight with Orange Cake Mix or Mates of State, they are harshing on Billy Joel (something I can totally support). Rather than being “Secretly Minnesotan,” Sean Tollefson is being smug in Delaware.

What really grabs me most is the album’s sense of reckless abandon, something we haven’t seen since City of Subarus – likely a product of the recording process which centered around unplanned experimentations immediately recorded in the studio. My favorite examples of this perfect whimsy meets garage aesthetic include the modish guitar licks Corianton Hale came up with on the fly (especially at the beginning of “Has Your Boyfriend Lost His Flavor On The Bedpost Overnight?”) and Chris Munford’s impromptu melodica bits (especially in the middle of “Passing Observations”).

Of course, I recommend you dig into the whole album (repeatedly), but my favorite songs include:

This song will likely be voted “catchiest” on the album and it’s a sure fire favorite (and have you seen the video, animated by George Pfromm?). I’d like to again profess my love for that melodica part at the 2.07 point of the song.

Let’s be honest – *this* is my favorite song on the album if only because it means that Sean has listened to me yammer on about my Delaware childhood. It’s got a subversive y’alternative twang intertwined with the fast punky speed with which most people drive through the very small and first state.

“Hearts in the Sound”

I can’t wait until this summer when I to play this in the car at full volume, windows down, with the t-shirt weather in full bloom. It’s a look back, a look forward, and it makes my heart soar with delight.

“Lost Our Friends to Heavy Metal”

“Has Your Boyfriend Lost His Flavor on the Bedpost Over Night?”

The song with the longest title on the album is also the most subtle… and we’re SUPER stoked to share the brand new video for it!

It’s been 6 years since the last album – coincidentally the same amount of time since the birth of Sean Tollefson’s (lead singer / bassist) child and Chris Munford’s (guitarist / vocals) third child. It’s natural that the band spent the last six years focusing on their personal lives (jobs, travel, families). Even with the major growth spurt they’ve each experienced independently, the band’s parts seamlessly create a sum that is true to their indie-scholar roots. The songs on this album will make us laugh and smile and turn the knife in our indie-pop heart.

As I type this, there are vinyl copies of the album available at Happy Happy Birthday To Me Records and (hopefully) at your local record store. You can get it digitally via the Tullycraft bandcamp page… or just check out all the items on the Tullycraft merch page.