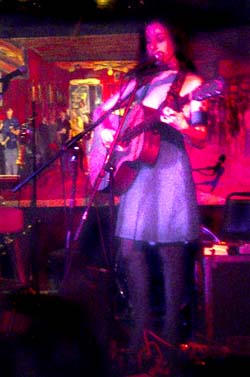 It has been a few years since I last had the chance to see Marissa Nadler, and from the first breath of her highly reverbed vocals, I was transplanted back to some lonely late night room where her melancholy lullabies offered some kindred consolation. On Tuesday evening {6/7}, she performed a solo acoustic set at the Sunset, which was both intimate and lovely even though she proclaimed several times during her appearance that she wished she had the money to be able to bring her band along for the tour. It didn’t matter though because one striking sign that Nadler is a great artist is that she is able to create transcendent music whether or not there are other musicians accompanying her on stage.

Nadler has just released a new eponymous LP called Box of Cedar and showcased several songs from it in her set. “In Your Lair, Bear” is a stark song that is reminiscent of Songs III: Bird On The Water and could easily have fit on that record. It was certainly one of the most gorgeous songs of the evening. The simple, sorrowful structure of her finger-picked guitar is not dissimilar to Leonard Cohen and her spectral vocal delivery remains true to her classic sound. “Mr. John Lee Revisited” is another beautiful track. It explores similar territory to the former with a sad, gentle melody and mournful vocals.

Of the older songs, she unfortunately did not play anything from her last record, 2009’s stellar Little Hells. Nadler did, however, highlight three tracks from Bird On The Water (2007). All of them were faithful to the studio renditions with “Sylvia” being particularly moving. There was also an interesting choice for a cover song in the middle of the performance where she played a medley of Bruce Springsteen’s “I’m On Fire” and Townes Van Zandt’s “Tecumseh Valley.” The latter was basically the middle portion of the medley and was bookended by the former.

Marissa Nadler’s new record is not as heavily somber as her previous releases. In fact, some parts are quite poppy, which is a new experiment for her. As alluded to earlier, the disc features more of a full band effort as was debuted with Little Hells. The LP is not quite as powerful or memorable as the former, but still will not be a letdown for anyone who listens to her music.

In Your Lair, Bear

Daisy, Where Did You Go?

Your Heart Is A Twisted Vine