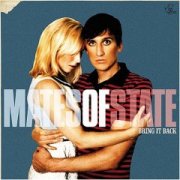 I am a sucker for a number of things:

By no means is this an all-inclusive list of my weaknesses and predilections, but if you're ever curious how to get to me (in a good way), keep this list handy. Mates of State fulfill #5 and #6 to a tee (heck, maybe they could get #1 too, if I asked nicely), and after three albums of varying quality, they have hit their stride with their latest Bring It Back. Gone is most of the excessive cuteness that bogged down their early work, and instead they blossom with a sonic maturity that is much more satisfying.

The biggest criticism of the Mates of State is that many times they songs just seemed so lightweight — kind of like the cotton candy of indie rock. Sure, it might be sweet and you feel like you really want some, but once you start chomping down on it, you realize that (a) your teeth begin to hurt from the sugariness and (b) it doesn't have much substance. Not to say that there is anything wrong with ultra-sweet indie pop. Heck, there are a lot of bands that made a career out of being sweet and harmless (I'm looking in your direction Belle & Sebastian and Tullycraft) but sometimes it takes a concerted effort to give your music that added depth to make the songs truly memorable (something both Belle & Sebastian and Tullycraft have accomplished). Bring It Back is that great leap forwards for Mates of State.

The album opens with the rolling drums and infectious keyboard of "Think Long." This song has a bittersweet tone that sets the mood from here on in. "It doesn't have to feel so wrong," intones Jason Hammel (drums) while Kori Gardner (keyboard) whispers the chorus. The instrumentation feels thick and luxurious, dripping out of the speakers. Taking a page out from New Wave (which many songs by the Mates do), "Fraud in the â€˜80s" is fast-paced and aggressive with a downright cocky chorus of, "You will surely find this/pleasing to your ears." These two tracks are fun, but hint at the melancholy that follows in "Like U Crazy," possibly the pinnacle of Bring It Back. The intertwined vocals suggest at a pool of longing and loss that is tinged with blissful memories of events long since disappeared. The depth of the melody combined with the emotive power knocked me dead the first time and still gives me a little lump in my throat. These three songs that open Bring It Back make the rest of the disc seem like icing.

That is not to say that you don't get the same returns from other songs. "For the Actor" is a bouncy song that sounds like a long-lost relative of the New Pornographers. They almost find themselves on the Anniversary's family tree on "So Many Ways" whose marching beat is completed by back and forth vocals between Kori and Jason that soar over the melody. The driving keyboards of "Punchlines" almost drown out the vocals, as Kori and Jason shout, "It's not the same without you around." A heavy Beatles influence permeates "What It Means," with a Sgt. Pepper's McCartney-style piano line that mutates into a thunderous chorus overwhelm by rumbling drums. The counterpoint to this is the quiet, understated "Nature and the Wreck" where Kori's vocals take front and center unlike anything the Mates have done. The album closes with the downcast "Running Out," which feels like an ending that brings the hope of new beginnings: "Let's trade this tired home/for all its worth in paper." Kori ends the album by repeating, "Tired of singing," as the music builds to a crescendo and you find that sentiment hard to believe.

Bring It Back showcases a full sound that the Mates of State lacked previously, with their rich melodies now backed up by solid instrumentation and strong vocals. They combine contagious melodies that will be stuck in your head for days with a melancholy that feels genuine. The Mates of State have perfected making feeling sad seem like more fun than it ought to be.