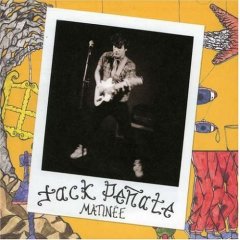 On the flipside of the current British pop revival is Jack Peñate. Now, I don't know if I dislike Jack Peñate because he dates/dated Kate Nash, he seems irritating in his videos or because he, well, is pretty bad musically.

Jack Peñate longs to be an important voice in Brit-pop, something like an '00s Dexy's Midnight Runners or Madness, but instead he sort of comes across like a watered-down Anglicized John Mayer. Yes, it is that ugly. Now, why is it that I dislike Jack Peñate so much when, in many ways, he is similar to Kate Nash stylistically? Ah, well, this is where the dreaded intangibles kick in, like the fact that you can get bored with Jack Peñate after less than a single listen to his songs. Maybe it is his completely uninteresting vocals, maybe it is the fact that all his songs sound identical, or maybe it is just some deep-rooted hatred on my part for the male pop singer-songwriter (Jason Mraz, come on down!).

How XL Recordings let itself get within 20 miles of Matinee is beyond me.