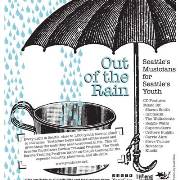 Out of the Rain Compilation: Seattle's Musicians for Seattle's Youth

A local non-profit organization called YouthCare is releasing Out of the Rain, a compilation album by local musicians to help finance and raise awareness for their Barista Training Program. As a guy who needs a job, that sounds like a great idea to me!

But are you reading this web-page looking for worthy causes to support? You there — in the black — YOU are? Well, here's one then!

Harder question: Do you buy many compilation albums put out for worthy causes? I didn't think so. Because they usually really suck, don't they? Oh yeah! Activists seem to have a LOT of musician friends. Too many, and their hobby has to end up someplace sometime I guess. And that place would be for a quarter at Every Day Music.

So why am I giving this a 7.0 rating? That's pretty high, isn't it? I ain't that noble — I sure wish there was a Barista training program for someone MY age. *Cough cough.* But really, power to the people, fuck Bush, all that, I'm with ya kids.

The reason this eleven-song up-with-yooth sampler should not escape your attention has to do with the musical gems amongst the, um, usual unspiced chorizo.

The second song is "1,000 Fragments" by a group called Infomatik, and it's a mean little anthem about "killing your idols." Okay, that's a wee bit ye olde line … but it has that splendid Cure bass riff played on guitar, a nice sulky vocal, and drives your wavo girlfriend home after a short stop to Jack in the Box. Good greasy techno-punk.

But then the third track comes up, and it's "Devil in the Details" by the Walkabouts, and yeah, that's why people say those things about them. And it's an exclusive! And the lyrics are brilliant fragments about ennui and every day evil and the mocking universe, like a really good Denis Johnson poem, and the musical tone is like a stark confession from a friend. "The future is a muscle you don't have." It's imagery, a story, and a song to never forget. It's worth the whole cost of the album alone. Well, if you have a lot of money. But really.

But right after it Reggie Watts comes in singing (I mean, really SINGING) a joyful little R&B ditty called "Part of the World," which reminds all the Jonahs out there that Nineveh is just down the road from Nineveh and you never get any farther. His Al Green-style chorus is classic, and while this stuff is hardly my forte, I mean, come on, it's like Al Green, man. "I can't believe this town / it kicks you when you're down / no matter who you are." Ouch! Fucking Seattle. We should just pitch and buy the kids bus tickets to somewhere else then. But really. Poignant, emotional, and melodic — nice stuff.

Then a good Supersuckers song about drinking and fucking up. "I drink too much / I'm broke so let's go dutch." Funny stuff. You can read your collection of HATE comics to it. Peter Bagge made heroin jokes that'd split yer gut before '93. I guess they decided not to offer up the one they wrote about the recent post-structuralist responses to Lacan. Or what it's like to be sodomized by major labels. I'd kinda like to hear a few of those, because their feelings might be strong enough to take what is an exercise in club-soundtrack to the level of verisimilitude, well worn territory regardless.

Critters Buggin advertises all the gear you can buy at Trading Musician (someone steal their gear!), Carrie Akre gives a big old wave out to Joss Stone (tell me what I'm doing here!), some friends squeeze their way in, and Kinski scrape up the barest scrap of minimalist-noodling to lovingly hand over for the cause, but the above fawned-over tracks make this worthy of your donation.