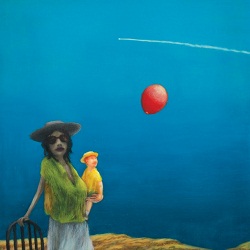 For their fifth full-length album, Moms, Portland’s Menomena underwent a significant lineup change: front man and multi-instrumentalist Brent Knopf left the group in January of 2011 to focus on his own project, Ramona Falls. Thankfully, the remaining members of the band — bassist and saxophonist Justin Harris and drummer Danny Seim — are not short on talent in their own right. Friends since high school, the pair simply kept the band together as a two-piece, and the result is an album that proves to be Menomena’s most lyrically intense and earnest work yet, and also one of their best.

While the sound of the band occasionally argued and feuded as a three-piece, now that they are down to two, the decision making process has been refined and by all accounts, it appears as though the recording of Moms was very collaborative and productive. The songwriting and singing duties for the ten tracks are now split evenly between the two members; with Harris and Seim taking the lead singing role on five tracks each, even alternating back and forth from track to track.

The most striking development on Moms is the straightforward (and at times downright dark) lyrical moments on the album, which is often seemingly directed at their upbringing and family dynamic. Seim’s mother died when he was young, and Harris was raised by his mother after his Vietnam-veteran father walked out on the family when he was still a teenager. A strong example is this line from the Harris sung “Pique”, where he sings: Now I’m a failure / cursed with male genitalia / a parasitic fuck / with no clue as to what men do / impossible to love. On “Heavy Is As Heavy Does” Harris touches on a multitude of topics including family (Heavy are the branches / hanging from my fucked up family tree), religion (I’m not one for religion / but I can’t seem to shake this imagery) and relationships (Among six billion people / I want the ones who never wanted me).

Lyrical content isn’t the only area of Menomena's growth and development on Moms, as the band also explores new territory musically. The album features much of the same catchy bass lines, tight drumming rhythms, and flourishes of piano and saxophone that fans of the band will recognize and love. New to the instrumental fold, however, is the use of a flute, which appears on three different tracks on the album; and “One Horse”, the album’s eight-plus minute long slow-burning closing track, features cello, Wurlitzer, and viola, all of which round out the symphonic appeal.

All in all, Moms is a rewarding album for fans and new listeners alike. After all the years and the turmoil the band has been through, it's refreshing to see that they've not only made it out in one piece, but they're still putting out provocative and engaging albums. You can experience Menomena live, in all their glory, as they finish up the U.S. leg of their North American fall tour with a stop in Seattle at Showbox at the Market, on Friday October 26th.