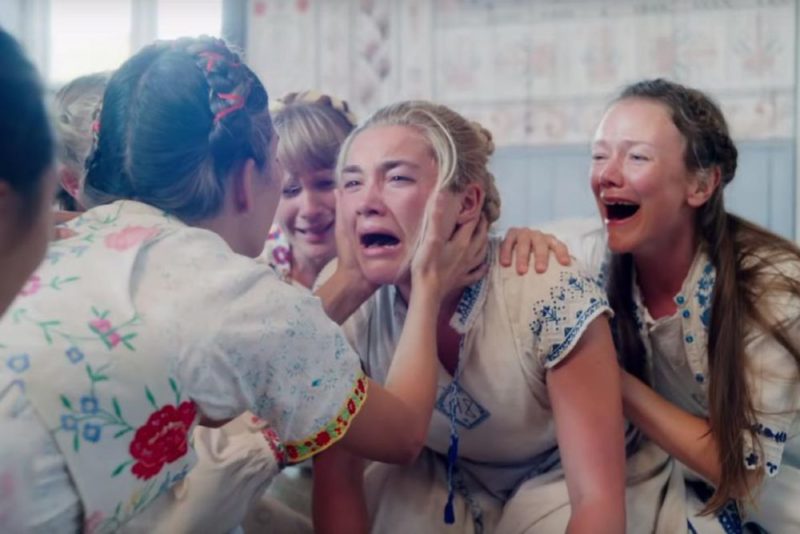 Midsommar, aka, I took a trip to a remote Swedish village with my shitty boyfriend and his self-centered friends and all I got was a bad mushroom trip and this lousy flower crown.

JK I actually LOVED this movie!

Ari Aster’s follow-up to Hereditary is everything I want in a fucked-up, fantastical, creepy cult horror film — and also more than that (but I can’t tell you what that more is without spoiling everything for you, so DM me on Twitter or hit me up for Happy Hour drinks if you wanna know). So let’s get into it … avoiding as many spoileriffic elements as I can.

Florence Pugh is a goddamn revelation as Dani, a college student struggling with family problems and the realization that her long-term relationship with dickbag Christian (Jack Reynor) is falling apart. As Dani confides her fears to her girlfriend, Christian’s friends Josh, Mark, and Pele complain about how needy she is and encourage him to go ahead and dump her already so he can bang someone hotter. Yeah, they’re all really great guys.

Christian in on the brink of doing just that when tragedy strikes and Dani loses everything – which puts him in the awkward position of “having to stay” with her because you know, if he doesn’t, someone might think he’s worse than a dickbag. Then, after she accidentally finds out about his bro trip to Sweden,  he guiltily invites her to come along.

Dani accepts the offer, even knowing that Christian doesn’t love her anymore and all his friends can’t stand her – because, TBH, she has nothing left to lose at this point. She tamps down every bit of anxiety and grief she has so doesn’t “spoil” Christian’s good time, even though it’s clearly taking a huge toll on her psyche — something which only Pele seems to register.

Once the group enters the idyllic farm community of Hälsingland, Dani relaxes a little. The sun is {literally ALWAYS} shining, the bright, smiling faces of the townspeople are reassuring, and good food and psychedelic tea are given to the visitors freely as the commune prepares for a purification ritual that takes place once every 90 years.

But something more sinister lurks beneath the surface, and as Dani and the group become more and more disoriented and unsettled, weirder and weirder shit starts happening and the cracks in all of their relationships grow larger and larger … and that’s really ALL I can tell you without ruining the whole thing.

So instead, let me rhapsodize for a bit about Aster’s world-building here. He worked with production designer Henrik Svensson over five years to create every detail for the buildings, the characters, the costumes, and the whole mythology of this community, including the ritual details and even a whole made-up language. Plus, uh, they built the entire town from scratch.

All of that careful research and thought is probably what makes Midsommar so goddamn beautiful and fascinating to look at, and creates a fantastical otherworldly feel that added to the heightened state I had while watching. And I know for every detailed hint about where the story was going that I did catch, there are hundreds more I missed and I’ll need to watch it again and again in order to see them all.

“But is it scary?” Your mileage will vary, of course, depending on what exactly it is about horror that you find terrifying. I will say that I didn’t have that same sense of uncomfortable, almost pukey, dread that I had while watching Hereditary, but I was in suspense the whole time wondering what the fuck was gonna happen next, I had a TON OF FUN, and I heartily applauded the ending.