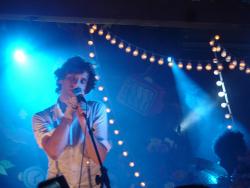 Mika could be anything you like, as long as it's glampop

In the beginning there was a large blue ball. Then it burst and an angel appeared, who danced & disappeared into the fog as Mika came on stage to sing "Relax, Take it Easy." High-pitched girlish screams rippled through the audience at this point; since it was an all-ages show on Valentines Day, there were a large number of high school girls welcoming Mika as their "date" that night. And so began the latest wave of super-hyped British glam pop-rock, with glowsticks imprinted with MIKA! flashing throughout the dancing audience.

When I say dance, of course, I mean vertically jumping or bobbing to the beat — the floor was so packed that there was only room for movement on the outskirts; however, it speaks well for the energy of a show when you can stand still and be moved up and down by the people next to you.

Up-beat, catchy sing-along sugar-petaled music was the main dish served up with confetti and strings of light bulbs on the side; one of the night's surprises was a cover of Eurythmics' "Missionary Man."

During "Love Today," the main drummer abandoned her station to dance around while a backup drummer played. Mika stripped his shirt off and performed a drum solo while standing on the bass drum, back/butt to the audience. Afterwards, he and the drummer pranced around and played drum solos on a center piece with two trashcans that were surrounded by flowers.

There were flowers all over the stage, actually, which reminded me of a bulletin The Shackletons had posted earlier in the day: "…if more bands used flowers on stage … then florists wouldn't have to focus so much of their advertisement money on this specific day … everyone should copy the smiths…." Yes. Flowers are pretty.

Another band similarity that popped up was during the song "Happy Ending." Mika's current popularity is similar to the position that Savage Garden held in soft hearts during the '90s, but he's improved it by quite a bit. Mika doesn't limit himself to emotional romanticky stuff and favors positive lyrics that focus on the self vs. how other people affect the self, yet he still pays homage to the way that love affects everyone — and not always postively. The lines "This is the way you left me / I’m not pretending / No hope, no love, no glory / No happy ending" received rousing applause that night.

While the performance plowed through most (if not all) of the songs off his debut album, Mika's vocals were impeccable — despite a sheepish apology mid-show for having a cold. With the way his voice clearly hit the high, soaring notes that were scattered throughout the song list for the night, though, you wouldn't have noticed otherwise. It's no small accomplishment: I went to a Harvey Danger show at the Crocodile once when Sean Nelson had a cold, and he had to go down an octave because hitting the high notes in "Little Round Mirrors" produced puberty-like voice-cracking. Kudos to Mika for figuring out the work-around to the common cold! Please to share with the rest of us, kthanx.