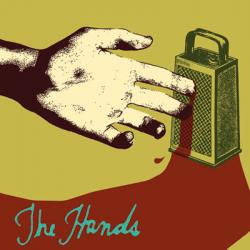 Equal parts Mick Jagger swagger and MC5-esque rousing rock sensibility, The Hands' debut self-titled album is the soundtrack to a drunken night spent in a crusty dive. The Stones influence is there, as are rollicking solos and a burly, slightly slap-back vocal approach. It has a high-fiving, ragged boots in a rock club feel to it that just can't be described by comparisons.

The Hands cut their teeth on house parties and opening slots and have blossomed by word of mouth. They've come a long way since the days of doling out sacraments of absinthe to the crowd at a rock'n'roll is dead-themed house party. They're here to prove that keggers, heel-stompin' and hell-raisin' might not be so bad after all.

Starting off with a bang, "Six Gun Hand" is the verbal equivalent of shaking your fist in the face of anyone and everyone who will listen. It starts with rock and just doesn't stop. Parts of this track reek of Guitar Hero solos fueled by shots of Jim Beam and deep bong hits. "Best" rocks the keyboard hard during the intro and the band professes to have "talked to Jesus Christ in a dream." The rough twinge of rockabilly laces this album, making it feel more like one of your dad's dusty old records from the attic rather than a throttling keg-soaked Northwestern garage rock band. Formed from remnants of Olympia bands Cougar Fucking Mountain and the Measurements, the Hands have managed to meld their sound into one kick ass set of twelve.

"Lies Lies Lies" feels a little like a small town classic rock cover band and a little less like your roommate's boyfriend's scummy basement band… or are those one and the same? "Hold Your Head Up" gives us a dose of "Crocodile Rock" but doesn't follow up with piano ditties or freakishly large glittery sunglasses. Instead, it blasts us with the now irrevocable driving rock.

Parts of the album, like "Wade in the Water," channel fellow NW band and Sub Pop mainstay Dead Moon, minus the grating vocals. The songs are purposefully disjointed, laden with hooks and steeped with manly growling vocals — a truly American blend of rock'n'roll with a little despair thrown in for good measure. Loaded with religious subject matter, desolate lands, and bar anthems, The Hands is the soundtrack to a futuristic spaghetti western. It oozes of influences like the Riverboat Gamblers (raucous Denton, TX band) or the Flaming Sideburns.

Producing wild rock born out of punk standards and whisky-soaked jam sessions, The Hands deliver an unruly debut self-titled LP. Blaring horns complement raspy shouts and deliver the heel-stomping aesthetic that good rock songs are made of. The Hands definitely have a style that they stick to, and usually I get weary of that… but right now I'm just enjoying the ROCK.