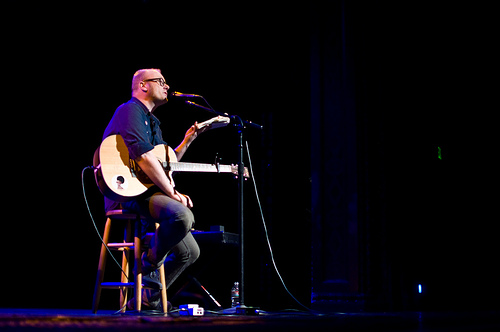 Mike Doughty: The Book Of Drugs

The short version: I saw Mike Doughty perform a few songs and read from his recently-published The Book Of Drugs at the Triple Door this past weekend. I'm only a third of the way through the book in real life, but based on that (and his readings), I think it's pretty great and that you should all buy it / download it / acquire it in whatever manner you acquire your literary media these days.

The slightly-less-short version, as per brain-dump notes mid-show:

Both the book and the show are absolutely worth reading and observing, if for nothing but the chance to watch Mike Doughty set himself free and exorcise his Soul Coughing-tinged demons. Amidst offhand commentary, asking the audience to steal his album [Yes and Also Yes] and share it, admitting that it was named a failed attempt at an OkCupid profile; his carefully chosen words between songs gave us a glimpse into the insight that is Doughty himself — speaking candidly about the horrors of life in a band he couldn't stand, and as he eventually began to sober up, [ed. note: attempted paraphrase] "scraping away the veneer as one would scrape away the covering of a lottery ticket with a coin to reveal the numbers," the veneer being one that he'd held himself captive with for years of drug and alcohol abuse. The evening's set was peppered with crowd-pleasers like "Twenty-seven Jennifers," "Rising Sign," Mary J. Blige's "Real Love," along with a from-stage kick in the teeth to the guy who requested a Soul Coughing song two-thirds of the way through the show.

The wrap: if you haven't read the book, do yourself a favor and pick it up when you can. And if you missed the show, make sure you catch Mike on The Morning Show with John Richards on KEXP tomorrow morning {that's Tuesday, April 10th}, when the station will be airing an interview and performance.