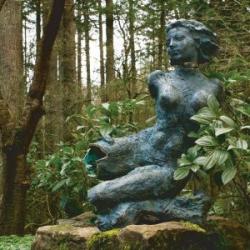 (Three Imaginary Girls is hosting a crafting and listening party featuring this album on Sunday, August 8, 2010 from 1 to 3 pm at Neptune Coffee in Greenwood, which has some of the very best coffee in Seattle.  You can also hear “Five Little Rooms” from this album on the August 2010 edition of the Imaginary Mixtape podcast.)

Danny Seim, Justin Harris, and Brent Knopf are collectively known as Menomena, a Portland, OR group enjoyed by many for its mindful artistry in their opaque yet luminously layered songs, excellent live performances, and superb packaging. Mines is their first album after a three and a half years hiatus, after astonishing the national press and fans with the Pitchfork-awarded “Best New Music” title for the 8.5-awarded Friend and Foe.

The three musicians trade off on a lot of different roles playing in the band, but the heart of Mines is not occluded; these are songs with singular vision, a focus on the inner-workings of relationships even while things are falling to pieces and nothing much is left below. Impeccably recorded, Mines has a tendency to sound either too busy or generic if listened to without focus. These are indeed the interwoven sound sculptures the indie press has raved about, but that’s not the best part of the record. It’s in the way it rewards close listening to its “graveyard of unpublished poems,” the tense scenes described while “Dirty Cartoons” play in the background, captured in “hundreds of loops spontaneously, then pieced together … like jigsaw puzzles” (as the PR describes). It could be speculated that these thinly veiled lyrics about relational entropy and economic chaos were written in the throes of 3 am coffee shop catharsis; and applied to music slaved over more in the hopes of healing than the heat of joy. Either way, it’s gorgeous.

Mines holds together more as an album statement than a collection of songs, but there are individual high points that shouldn’t neglect mention: “TAOS” is a heated tarmac of splintered hearts and shattered hopes in the straight and boldest rock of the album; “Dirty Cartoons” has desperate vocals that could have been from a Larry Normal album in the late 60s, silently pleading for repentance with a partner; “Tithe” is a ferocious, finely constructed attack on people’s everyday lack of empathy; “Oh Pretty Boy, You’re Such A Big Boy” has a menace under a shimmering surface that commands further investigation for meaning; and even a more poppy, commercial sounding emotional peak like “Killemall” is trembling on the ledge over an abyss of doubt. I am resisting printing lyrics from the album as I really do think they are “mines” for each listener to find as they course through the thrush of its architecture.

Seim himself wrote the bio for Barsuk to send out with the album, and he admits both that they worked themselves crazy over these eleven chapters of angst, and meanwhile that personal and political doom pervaded their inspirations for it. It’s been fussed into perfection, and I don’t recommend listening to the album as background flow; as well made as it is, the vocals are a bit too smooth and the magical charm leaves when you don’t stare closely enough into it. If it’s an album about distance and even disassociation, it succeeds in demanding attention for a pay off. I find it fascinating that its come out the same summer as Inception, and wonder if when that metaphysical movie maze is released on DVD, Mines will match up to it as well as Dark Side of the Moon is rumored to with the Wizard of Oz. That would maybe give you a good idea if Mines is something you’ll blow up over.