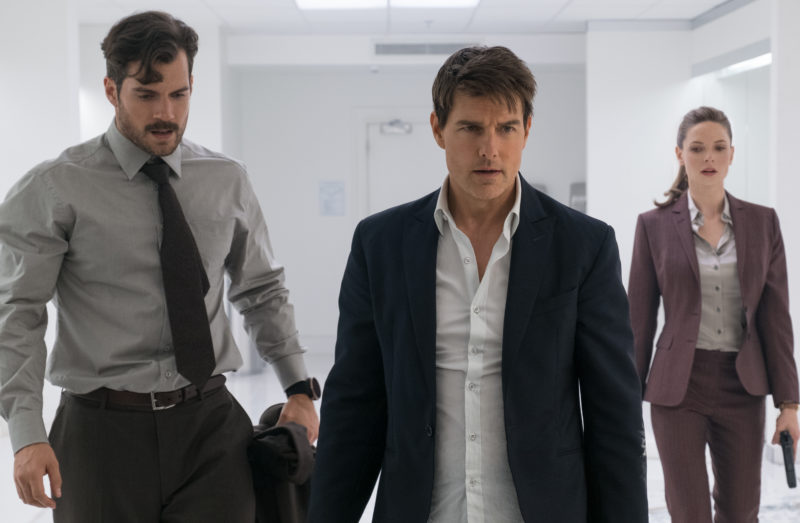 Well, here we are: 6 films into a series that has taken up 22 years of our lives, with Mission: Impossible – Fallout being the most insane entry yet, but also the most fun.

This time around, Ethan Hunt (Tom Cruise) manages to lose Solomon Lane – the big bad from MI: Rogue Nation and the leader of “terrorist members only” The Syndicate. Hunt sets off with IMF members Benji Dunn (Simon Pegg) and Luther Stickwell (Ving Rhames – whose voice I find so intoxicating I honestly don’t know why I’m not at Arby’s every day) to find Lane again, starting with trying to buy some stolen plutonium.

Unfortunately the mission goes awry because of those pesky Syndicate members dubbed “The Apostles,” causing CIA Director Erica Sloan (Queen Angela Basset) to step in, push  Alan Hunley (Alec Baldwin) aside, and insist operative August Walker (Henry Cavill and his $25 million mustache) join Hunt on the next part of the mission to make sure he stays on task.

What should be a simple mission to find arms dealer John Lark and secure the plutonium gets complicated pretty quick. Alpha male Walker doesn’t follow Hunt’s directions, Isla Faust (Rebecca Ferguson) shows up with a lot of guns and some confusing info, and there’s a charismatic third party called “The White Widow” involved with her own agenda.

The pursuit of the plutonium, of course, involves a TON of over-the-top action sequences: Tom Cruise speeds through the streets of Paris on a motorcycle! Tom Cruise parkours across Paris rooftops! Tom Cruise flies a helicopter through narrow canyons! Tom Cruise gets the shit beat out of him again and again and again for your entertainment! (TBH, I *do* find that entertaining).

Of course, that’s not all. This is mission IMPOSSIBLE, so the complications keep piling on until the film’s exhausting, satisfying conclusion (at 2 hours and 27 minutes, you’re ready to go home and give your eyeballs a rest).

Everyone knows I’m way more of a Fast & Furious fan than a Mission: Impossible fan, but watching Fallout was big, stupid fun. It helped that I was sitting in a row with my mom and a bunch of guys I’m lucky to call my friends, so we could all “ooh” and “aw” over the same parts, and laugh our entire faces off at the sheer ridiculousness of it all.

And even though Henry “I’m afraid to ask out women because it’s SO HARD TO BE a straight white man!” Cavill is now on my shit list, it was still entertaining to see his engorged arms operate almost independently from the rest of his body, while completely and totally dwarfing Tom Cruise in every scene they shared.

Aside from the pure escapism of this film, I loved so much about it. I loved every bit of action that was on screen; I loved watching the team work together to save the world – masks and all – up against a impossible (haha!) deadline; and I even loved the way Luther gave Ethan’s new special lady friend the DL on his previous special lady friend. Also, oh, hey Wes Bentley! Whatchoo been up to?

Two days later, I still have the theme playing in a loop in my head and I’m not even mad about it. Go see it! Have some fun, because we all NEED to grab every bit of that we can right now.