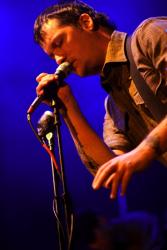 Modest Mouse at the Paramount

It was 10:30pm as I watched as someone crowd surf while Isaac Brock sangs “let it all drop." The irony was not lost on me.

Modest Mouse returned to Seattle for the second time in a month to play a sold-out show at the Paramount Theatre. It was an interesting show, one that movesd from disaster to perfection and back several times throughout the performance. I’ve seen Modest Mouse enough times to know to expect the unexpected, and this show was no different.

They opened with “Bury Me With It,” after Isaac discussed some indiscernible randomness with the masses. The crowd roared a few songs later as they launched into “Dashboard,” the first single of the new album We Were Dead Before the Ship Even Sank. I expected to see them run through a handful of new tracks, but when “Dashboard” ended I heard the trademark intro to “Paper Thin Walls” begin. They got about halfway through the song before they stopped and new member Johnny Marr convened with Isaac at center stage. After a brief discussion the song commenced, but it didn't seem like a planed act designed to raise the anticipation level within the crowd. The look on Marr’s face seemed to say, “what’s going on here?” and I couldn’t help but notice that the rest of the night the band members all looked to their left to try to follow whatever direction Isaac moved in. It was a difficult task, as he thrashed about the stage, swinging his guitar wildly and alternating between whispers and screams.

The first five songs passed while I tried to determine what kind of show I was getting. I couldn’t tell if Isaac was fucked up or if he was just into the show. It was a homecoming after all, and I didn’t expect a cut and dry performance. When the band launched into “Trailer Trash,” my hope was renewed. They took this old song and breathed new life into it and the crowd appreciated the arrival of the first song from Lonesome Crowded West. The same energy surged two songs later when they absolutely destroyed “Doin’ the Cockroach.”

Then it fell apart again, as I thought I heard “Tiny Cities Made of Ashes” but I couldn’t ascertain what exactly was going on. Feedback and distortion filled the air as Brock mumbled along and I was crushed as the quintessential live Modest Mouse song fell hopelessly by the wayside. They followed this track with “We’ve Got Everything,” which was awkward at best without James Mercer’s backing vocals. The song further deteriorated when Marr was forced to the mic to sing the chorus because Isaac doesn’t bother to. They closed the set and return to the stage for an encore consisting of “Ocean Breathes Salty” and “Spitting Venom;” then Isaac mumbled something about being lucky and the show was over.

This was my seventh time Modest Mouse show and I’ve never been more confused. Years ago when you got a bad Modest Mouse show, you knew it was bad. If Isaac was drunk or the band was off, you had no doubts. I’m not sure what happened at this show. I enjoyed it at times and at times I didn’t know what was going on. It occured to me that over the years the band has become so good at rolling with Isaac’s punches it doesn’t matter what happens: you’ll still get a show.