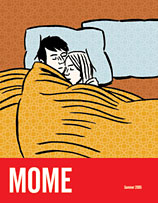 The Fall edition of "Mome" is almost out, so now is the time to tip possibly unaware TIG reading-frenzies to this brand new anthology series, edited by Fantagraphics' genius-publisher Gary Groth and one of the smoothest men in the art-funny books business, Eric Reynolds (Groth brought the world "Love & Rockets", and Reynolds makes sure the work of greats like Chris Ware gets so much popular culture notice). Adorably designed by awesome illustrator Jordan Crane, "Mome" is easily the best looking collection of short comic stories by up-and-coming independent creators, expertly chosen to be examples of a new generation of innovators.

The anthology comic has often had the best and worst examples of what's available in the independent or underground scene — think of this as similar to that of compilation albums, some of which came free with a magazine and end up in the side pocket of your car door after being played once; but occasionally one has all your favorite artists stacked up in one place, doing very special songs unavailable elsewhere, and rarely leaves your CD changer. "Mome" is the comics equivalent of the second category; as proof, I've read it three times since getting it in August. The great thing is the artists I've loved recently in the indie press are present, and those I barely knew of before reading them for the first time here, I'm craving more of.

"Mome" has avant-garde tendencies in some of its selections (and in the wonderful uses of color according to specific artistic styles throughout, for example) but for the most part in content sticks to subtle, creative storytelling, such as Gabrielle Bell's sweet-but-caustic slice-of-life drug-snorting neighbor-torturing opener, "I Feel Nothing," and Paul Hornschemier's perfectly paced relationship-falling-apart story "Life With Mr. Dangerous, Part One." Speaking of Hornschemier, Gary Groth interviews him, which is a wonderful idea for an anthology to do; not just print the works of new artists, but allowing us to know more about them as they are premiered.

I admit to being a sucker for the souring romance, sweetheart slacker champion Jeffrey Brown ("Clumsy," "Unlikely") as he appears here too, on loan from publishers Top Shelf, and his charming domestic bum persona lightens some of the darker, stranger moments. Sophie Crumb's work has a gutter-punk edge to it bringing back to mind the grimy subculture comics of the late 60s and 70s, in the three short pieces of hers presented. Her work begs to be re-read the instant after one encounters it, much like Phoebe Gloeckner's tales of growing up corrupted.

Newcomer Jonathan Bennett's possibly autobiographical "Dance With The Ventures," mostly about scavenging through tossed-out records at a garbage bin, raises a lot of questions about a sympathetic protagonist who might have troubling issues, but slyly avoids casting him as an element of parody.

"Mome" is ambitious – it wants to be to the start of the new millenium what progressive, occasionally transgressive underground comics publications such as "Zap," "RAW," and "Weirdo" were at the end of the previous century, challenging sensibilities, broadening medium borders, bringing in readers from outside subterranean comics fandom. Those other anthologies had been successful in tapping into contemporaneous counter-culture milieus, from the drug culture to the art and music scenes. There are a lot of individual works of artists out there that have been doing that lately, but no collection of various artists has raised the gauntlet in the same decade-determining, artistically provocative but still accessible, way that "Mome" does. Not everything in the Summer 2005 kick-off is thrilling, but most of it is excellent, and its intentions are as admirable as it is fetching to behold.