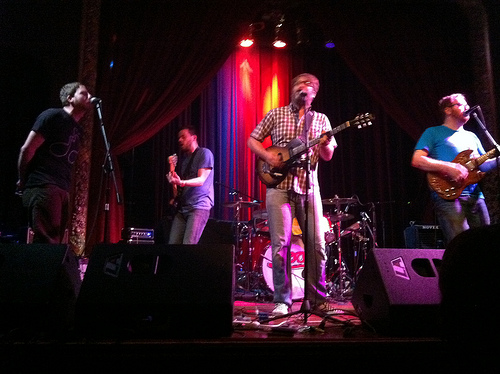 Monday morning check-in: John Roderick and the warmest day of the year

I hope everyone had a wonderful weekend and was able to make the most of what the experts have claimed to be the warmest day of the year.  My weekend was packed with some mundane blah stuff which was thankfully overshadowed by one hellava Saturday night in Columbia City.  After an amazing dinner at my new favorite restaurant (Island Soul, do not leave without trying one of their coconut corn muffins!), my friends and I headed over to the Fishboy / BOAT / Aqueduct show at the Columbia City Theater.

All the bands went above and beyond, but the highlight of the night was a surprise super special guest appearance. Mr. John Roderick joined BOAT on stage to chime in on "Landlocked," and then stayed on stage for a super-rock rendition of the Long Winters classic, "New Girl." {!!!}   To say it was jaw-dropping would be an understatement. It's been a while since I've heard the Long Winters rock-style, and boy oh boy, I hope this is a sign for things to come (next album, more shows).

My favorite part of the story? The part in which I found out that BOAT and John hadn't actually ever practiced "New Girl" together.  The band just sprung it on John when he arrived to the show that night {sprung = asked really nicely}. This just furthers my claim that BOAT (with J. Rod on lead vocals now and again) would make a great house band for the next late night talk show. Watch out Roots!

How was your weekend? What were your highlights?

Huge thanks to Button Dave for capturing the magic and posting to youtube: