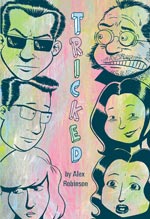 "Tricked" is an absorbing graphic novel about rock music, and the complications of every day relationships that reflect the chaos and energy of that force.

The binary relationship between Ray, a flawed famous musician who is cursed by distraction and depravity, and the increasing psychosis of Stevie, possibly his biggest fan, is the most dramatic element to the comic story. But the less glamorous subplots involving duplicitous lovers and broken family ties are also captivating. When it all comes together, it accomplishes more than just being entertaining; it lets the reader into the mind of the author and artist, who has been ruminating on what it means to be creator and fan. The feelings it leaves are a little disturbing, and more powerful than the well-worn iconic elements of the story suggest.

A few years ago, Alex Robinson used to do a friendly, infectious independent comic book titled "Box Office Poison". It was a shaggy dog soap opera about retail wage slaves, aspiring writers, and fan-boys finding love somehow. Coming out in the period that artists like Peter Bagge, Daniel Clowes, and Chris Ware were fairly prolific,

Robinson's ability to tell a good story and create believable characters seemed overshadowed in the indie comics market. Thankfully, Top Shelf, his publisher who had a major breakthrough with Craig Thompson's "Blankets" a couple of years ago, stuck with him, putting out a beautiful edition of that collected series, and is now promoting this outstanding debut work on its own.

"Tricked", despite a dull and lazy cover design, is gorgeously put together too, and Robinson's artwork makes wonderful use of its black and white printing. Robinson is remarkably adept and intuitively blessed at using negative space and letting layout to enable plot-lines to flow along, within his humble skills; the amazing ending montage may seem hyper-dramatic, but is excellently drawn. Without affectation, Robinson has blended cartoon styles of detail and exaggeration with a light touch, humbly crafting a world we sympathize enough with emotionally to want to be part of.

And that's where "Tricked" gets most of its power: by its own good nature, we become part of this world of obsessive icon adoration and fickle muse pursuing so easily that Robinson slips in some pretty uncomfortable questions about them within the clever imagery. He asks, "Is life about getting by and escaping in works of entertainment where we find pleasure and meaning, or should our existences transcend both creation and appreciation, and collaborate for some higher purpose instead?" Here the artist and fan find a level of truth we all must someday share, and it's to Robinson's credit he scripts and illustrates a tale that gives pleasure and meaning to doing so.