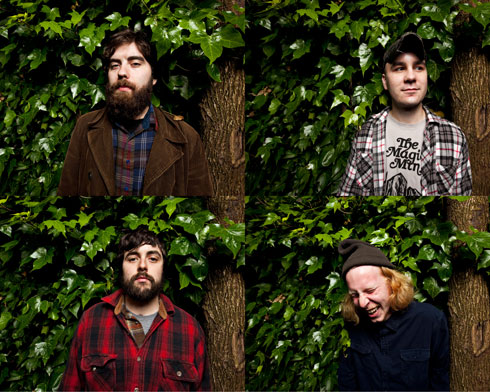 The Moondoggies and The Cave Singers at the Showbox

You can guess the ambience in the Showbox on an early November Friday night, especially once you add key details like these: The Moondoggies were holding down the second slot on a 3-band bill, prepping the crowd for the Cave Singers as both bands warm their engines for road swings.

Yes, there was rain – slightly Old Testament at times, pelting First and Pike. Yes, there scads of people seeking dry land and the solace of a locavore night of rock n roll. And the Moondoggies, who refer to themselves as the “Everett Shit Kickers” in their liner note on the stellar new disc, Tidelands, leaned in and let fly to warm the room.

The quartet has a wailing quality on their two albums, invoking tensions between hope and despair, love and loss, rain and sun – often in the same breath. And they wailed Friday, Kevin Murphy’s guitar sounding like far more than its singular power could muster. On record, the Moondoggies create a principal tension between a laconic, chesty vocal and a pressing forward pound, abetted by Carl Dahlen’s meat-and-potatoes drumming and Caleb Quick’s smudgily brilliant piano and organ. Fronting the racket is a disarming, gorgeous harmony – Dahlen, Murphy, and Quick going urgent and chunky and smooth, at once. Live, the quartet balanced the harmonies and their big sound like a chugging engine, Dahlen hitting his drums far harder than the records suggest, Murphy making something incongruous like a harmonic bellow, a deckle-cut vocal tatter that’s round and humid while his hollow-body guitars (acoustic or electric, the impact is the same) thump and then go pick-precise to weave with Quick’s keyboard in a cluttered ether. Their urgencies peaked Friday as they closed with the theology-meets-physicality pairing of “Save My Soul” and “Changing,” wherein Murphy blunts the conundrum: “They say Jesus gonna save my soul,” with the comeuppance, “… But I don’t feel like changing; no I don’t feel like changing.” And then the Moondoggies were done, offloading their gear so the Cave Singers could take over.

Where the Moondoggies leaned into their microphones, keying three-way harmonies as they shagged up the place, The Cave Singers took the stage with Pete Quirk looking like he had to lean back, as if his nasal yowl might overwhelm the electric gizmo. Quirk, beardless and newly relocated to West Seattle (as he let the crowd know), made his delivery look easy, even though it sounded like tough work to scale the heights, mesmerizing the room while Derek Fudesco’s guitar and bass pedals rattled the clothing and Quirk’s maracas, and tambourine, and Marty Lund’s mostly nuanced drums made collective dramatic propulsion. The Caves came on as the interstitial sound of Black Mountain’s debut faded, recalling the last time I saw the trio, opening or Black Mountain in ’07 at the Mercury Lounge in New York. In ’07, the Caves seemed even more threadbare, all sinewy guitar and decentered rhythmic clatter as Quirk sang. At the Showbox, they were all that, of course, but then Lund and Fudesco would intermingle like they were making an instantaneous tapestry with Quirk’s vocal vibrato quivering over the top. Beautiful. They hit the high notes, of course, with “Seeds of Night” and its shuffling highs running headlong into Welcome Joy’s “Leap” and the thorny crunch of “At the Cut,” made all the more raucous by Lund’s emphatic drum-thump kinesis. The Caves sounded and looked like they were shaking off the rain, feverish and at-home.