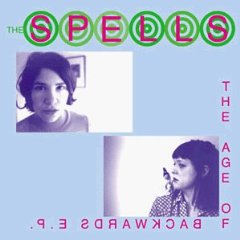 More songs (and news) from The Spells 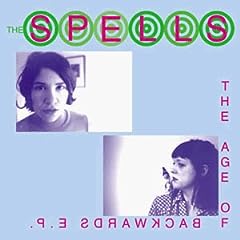 For a band that has released one 4 song EP and put a little over 8 minutes of recorded music into the world close to a decade ago, there sure has been an awful lot of talk about The Spells these days.

The Spells were a collaboration between Sleater-Kinney guitarist Carrie Brownstein and Helium frontwoman Mary Timony. They had released The Age of Backwards EP in June of 1999 on K Records – but haven't done much of anything together since then. Before all of this, a few weeks ago I had even brought the band up in an interview with a musician who is collaborating with Timony and was unaware of its existence. (Or maybe it was a lame attempt to impress a crush-worthy indie rocker of my knowledge of semi-bscure bands.)

Timony released several excellent solo records (on labels like Matador and Kill Rock Stars) and Brownstein has been writing most (including the Monitor Mix blog for NPR).

Now, Brownstein had uncovered our additional Spells songs that did not make it on to The Age of Backwards and she has posted them on her NPR blog (two songs, "Bat vs. Bird" and "Antarctica", are available for free download). Also there is an interesting conversation between Timony and Brownstein about their band.

Brownstein also gave an interview to P4k where she answered the question that keeps me getting out of bed every morning:

Pitchfork: Finally, I have to ask: Any possibility of a Sleater-Kinney reunion at any point?

CB: [laughs] [pauses] Yeah, I don't think we're ruling it out. But it's not going to be any time soon. We probably wouldn't use the word "reunion" [laughs]. We would say that the hiatus is off. It's just semantics, but yeah [laughs]. "Reunion" is a scary word. There's some horrible connotations in the word "reunion" [laughs]. It involves a lot of, like, face makeup, and everyone commenting about how much older we look. It's precarious: the longer you wait, I think it gets worse.

Pitchfork: Well, I know it would make a lot of people happy.

CB: It would make at least maybe ten people happy. I know we could fill a venue of ten people [laughs].

Pitchfork: I think it would be quite a bit more than that.

Pitchfork: You can play in your basement or something.

CB: Exactly. I would love to do a reunion tour if it only involved basements across the U.S.