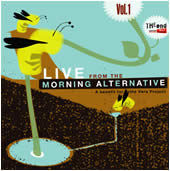 Live from the Morning Alternative

Since the fall of the oppressive Teen Dance Ordinance, the underage music scene in Seattle has been thriving. The best example of this is the amazing Vera Project—a wonderful club that has been a great place for kids to see some of their favorite bands in a clean, safe environment with a great sound system. They keep ticket prices low and don't allow alcohol in the building—but doing so isn't free.

To help out, the people from 107.7 The End have made a commitment to raise $50,000 for Vera and this compilation CD, Live from the Morning Alternative, is part of the fundraising effort. It has assembled an electic mix of Seattle-area indie-rock heros such as Death Cab for Cutie and MxPx. Each track is a live, intimate recording from either End broadcasts or "Endsessions". Some of the songs (live or not) have never seen the light of a studio — "Yes!" by the Divorce, "Rock Song" by Smoosh and "We Don't Serve Pork, But We Do Serve Pigs" by Pretty Girls Make Graves (in which frontwoman Andrea Zollo sounds like she's channeling Debbie Harry in this neo new wave tune) are the strongest.

Also notable are the stripped-down and acoustic versions of previously memorized songs—"A Viewing" by Visqueen, "Death By Mixtape" by the Lashes, "Lump" by the Presidents and "Sad Sweetheart of the Radio" by Harvey Danger).

There are plenty of songs to love on this comp, but the fact that it is a benefit disc for the Vera Project is the best reason of all to pick this up. And because it is only $6.99.