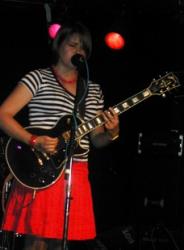 Most, The Turn Ons, and the Orphan Project

When I went to the Vera Project to start my Memorial Day weekend, I had no idea of the musical adventures to come. igDana has dubbed it my night of "the cute, the bad, and the swirly." And with that, I give you: Most, Orphan Project, and the Turn Ons.

Most is what you get when you blend two cute siblings and a solid drummer into an unpredictable, zany-pop smoothie. Frontwoman Sasha (guitars, vocals) is a spunky hipster who thoroughly amused us with her folk-meets-electric sound and jumpily earnest voice. She unplugged her guitar by accident a few times but no one cared (she's that cute, I swear) and anyhow, "that's what rock and roll is all about," she told us. That made me clap my hands and grin broadly, as did her adorable bass player brother, Dmitry.

Sasha's tiny twee guitar melodies and her lilting talking/singing rang through their tightly-wrapped live sound, as well as on their two self-releases: Systems (EP) and Invisible Giant (LP). I heart both, but I strongly recommend you go to one of their shows too, for the Most full effect.

{ed note: okay, I added that last pun. I couldn't resist, as I hope TIG is the first reviewer to make that quip. Thank you for your indulgence in my bad sense of humor. ~ igDana}

My personal favorite part: when Sasha demanded we dance or at least, "bob your head violently" to one of their songs. So we did. And I think we had way too much fun.

On the other hand, Seattle's Orphan Project was… how can I say this? Terrible. Freakishly punkish, they tried to be all hardcore, but it just sounded awful and ridiculously pretentious. It was sick. Then they threw water on the audience for some reason. I'm not sure why. In my notes I just wrote, "really annoying banging no tune sort of rock" and "their jokes are not funny". That's all I've got.

Later, the stage was shroud in complete darkness… slowly, this ultra-cool light machine-thing started up, with these streams of smoky light filtered through, bending around the band-members of the Turn-ons. A background screen flashed hypnotic images. My jaw dropped and I realized this so-called concert had turned into enormous eye candy.

The Turn-ons remind me of looking through a kaleidoscope. Everything felt a little fuzzy and the sounds seemed entirely bendable. I remember needing to put my notebook on the floor because I couldn't write anything. I couldn't even tap my feet. I stood really still and gaped because the atmosphere was so scintillating.

Travis DeVries (vocals, guitars) got off the stage and wandered around. That left me a bit confused because I didn't know whether I ought to gaze admiringly at the rest of the band on stage or follow his movements. I ended up doing both. His voice was raw yet powerful through the hazy melodies and dulcet, steady beats. They played some stellar pieces off their latest release, East including personal favorites "PS I Love You" and "New Jesus."