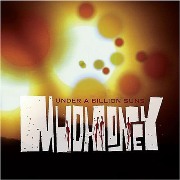 Under a Billion Suns

Mudhoney has always lurked in the shadow of those other Northwest rockers who went on to legendary status. Sure, Mark Arm and company got their moment in the spotlight, playing to arena-size crowds, finding a home on a major label (Reprise) and even appearing in a Hollywood film ("Black Sheep" with Chris Farley and David Spade). But during the days when supermodels flaunted flannel & Docs and the "Seattle Sound" wafted through every jock's stereo, the band who called bullshit on the movement in the song "Overblown" was perhaps the most under-appreciated of all. As their compadres rose around them to top-40 status, Mudhoney had the earnest perspective of being just under the mainstream rock radar.

After several years and three albums on Reprise, they were sent packing. It couldn't have been a better move, as the band returned home to Sub Pop, who had released their first pair of records. The Mudhoney of today, 18 years strong, is turning out skeezier, fuzzier tunes than ever before on their latest, Under a Billion Suns. Steve Turner's gritty guitar still grinds like a buzz saw under Arm's guttural yet melodic voice. Drummer Dan Peters dutifully thrashes away at the skins. Longtime bassist Matt Lukin left the band in 1999; replacing him is the rhythmic work of Guy Maddison. What makes this Mudhoney release different from those in the past is the heavy dose of politics thrown into the lyrics pot. Put it all together and you've got one filthy, foul, fantastic brew.

Probably the darkest, dirtiest song on Under a Billion Suns is "Hard-on for War," a lecherous take on the reasons behind our nation's entrance into war. Arm embodies the dirty old men (aka our lovely politicians) who leer after the wives of the shipped-off soldiers; with the sailors and sergeants away, the politicians can prey on their beautiful brides. I got sufficiently creeped out when Arm lewdly beckons "Come on little girl" — no doubt the intent.

Other tracks of note on Under a Billion Suns include "A Brief Celebration of Indifference," an instrumental number akin to the "Touch Me I'm Sick" era. And "Let's Drop In" carries a stoner swagger that's even a little, dare I say it, sexy (never thought I'd say that about this tattered and torn lot).

Arm's grimace and the band's growl are perfect partners to politically charged lyrics like those found on "Where Is the Future?" It's a wonder they didn't explore this marriage until nearly two decades into their career, but the formula may just be the thing the band was previously missing; Under a Billion Suns may well be their strongest effort yet.

I love that Mudhoney hasn't changed since those halcyon days of dirty, grimy rock that made Seattle a music-lover's tourist destination. They've slightly updated their sound with the addition of a snazzy horn section (it sounds weird, but it works), and they've (kind of) cut and washed their hair. But those modifications don't alter the overall sonic personality of the ultimate Seattle band.