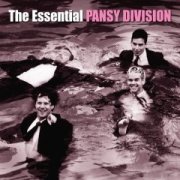 I've been avoiding Pansy Division since they formed in San Francisco in 1991. Sure, I was a huge Tom Robinson fan, went to womyn's music shows when there were hardly any punks in that scene, and one of my number one idols is Phranc. So what's the problem? For one thing, I thought that because of their description "homo-core," Pansy Division were musically hardcore. Ha! So I never bothered to check out a show, thinking it was just the same-sex equivalent of meathead metal-core. I felt the combination of a rather one-dimensional musical style (the loudest and fastest turned out to be the most boring, save for Bad Brains) with a fairly redundant lyrical topic based in vanilla gay sex {"He Whipped My Ass At Tennis (Then I Fucked His Ass In Bed)"} to be pretty resistible.

But listening more closely and repetitively to their brilliantly packaged greatest hits package — featuring a thirty-track CD and generous DVD of videos and live clips — I can't help but fall in love with the band's tunes, their lack of nasty ass Lou Reed transgressive spirit regardless. Most of the songs collected here from throughout their seven album oeuvre approach damn perfect power pop.

Besides sweet melodies and literate songwriting, what makes Pansy Division really shine is their point of view, exemplified by the line "Being nice is a radical act" in the awesome, outstandingly-calling-on-someone's-bullshit, a cappella "Negative Queen (Stripped Bare)." If a band is going to be gay but fairly non-kinky, it's great they also have a Jonathan Richman wholesomeness and positivity to their spirit.

Ethics and common decency seem very important at the center of most songs, in a way similar to Richman's as well. Songwriters Ginoli and Chris Freeman (bass) seem to really care about the characters they sing about, too, and as rock writer Joe Carducci says, love is the first reason to write about someone. Thus, the delightful yet devastating vignette "Denny," fully capturing the elements of an HIV positive individual, weird charms and warts and insecurity and included. Pansy Division have made a career out of distinguishing themselves as a "core" band with certain beliefs, but their creative sensitivities are (or should be) universal.

Even a song as preachy as the anti-meth "Spiral" is done with compassion, and the fact that it's a wonderful Shoes-style pop song too doesn't hurt. That could be said of "No Protection" too, which could really stand a souped-up, rocked-out remix. That would be my only complaint for the smorgasbord of talent-stuffed tuneage on this collection — I would love to hear a real artful Pansy Division record, beefed up with Phil Spector-style production, like their version of the Ramones' End of the Century or something. Let's hope that they one day have the budget for it.